Early in 2006, the NCR Ducati that I had ridden in the 1978 Formula One and Classic (Unlimited) Isle of Man TTs reappeared from the Brisbane shed that had housed it for around two decades. Its new owner contacted me and asked if I could assist him in restoring the machine to its TT condition – a request I was happy to comply with, particularly as it came with the offer of a ride once the ‘old girl’ was back to its former glory.

That ride materialised at the 2007 Pukekohe Classic Festival, and for the first time in almost 30 years, the NCR Ducati once again sat alongside Mike Hailwood’s famous F1 TT winner. There was even a third NCR; an un-raced example sold by Steve Wynne to Kiwis stalwart Kevin Grant recently, which until a week before the meeting, still sat on its original tyres.

In contrast to ‘my’ immaculate NCR (now owned by Queensland businessman Murray Kahler), Mike’s machine looked well lived-in. Steve Wynne was quick to point out (hundreds of times over the course of the meeting) that the Hailwood NCR had deliberately been kept in un-restored condition, right down to the perished silver duct tape wrapped around the makeshift mufflers that had been added to the standard open megaphones. The gear-shift still ran through the swinging arm pivot to the left hand side – a modification for Mike who could not change gear properly with the standard right side shift due to his injured ankle. The fairing looked decidedly ‘used’ and Wynne explained that he had touched up the green paint with a spray can after Mike had slid off at Donington Park in his final appearance on the Ducati. The riding duties for the Hailwood NCR at Pukekohe had been entrusted to my good friend and colleague Alan Cathcart, with Paul Smart on the Grant NCR. Our task was to ‘demonstrate’ the Bologna trio, alongside the other specially-invited bikes. Fortunately, we were free to demonstrate as fast as we liked.

This constituted my first-ever lap of the track, so it took a little while to get the sea-legs, but soon the memories came flooding back. Long and lopey, steering slow enough for you to change your mind, so-so brakes, but oh, that motor. Within a few laps the three of us formed up around the back of the circuit and hit the spectator straight in a tight wedge. Both my and Paul’s machine sported the original open megaphones, while Alan’s SMBH-model carried the small mufflers, but from all accounts 2580cc and six cylinders on full throttles made an impressive racket as we thundered past a sea of waving hands in the main grandstand each lap. Towards the end of the six-lap session, my mount began to misfire above 6,000 rpm – a problem that got worse over the weekend and defied all attempts to cure it.

By Sunday afternoon, after numerous plug swaps, a change of battery and carburettor adjustments, the NCR was deemed too ill to continue and it looked like I’d miss the final, meeting-ending demonstration. But in a piece of immaculate timing, Alan calculated that he would need to leave for the airport to catch his flight to USA before the final session, so I gleefully stepped into the breech on the Hailwood machine. 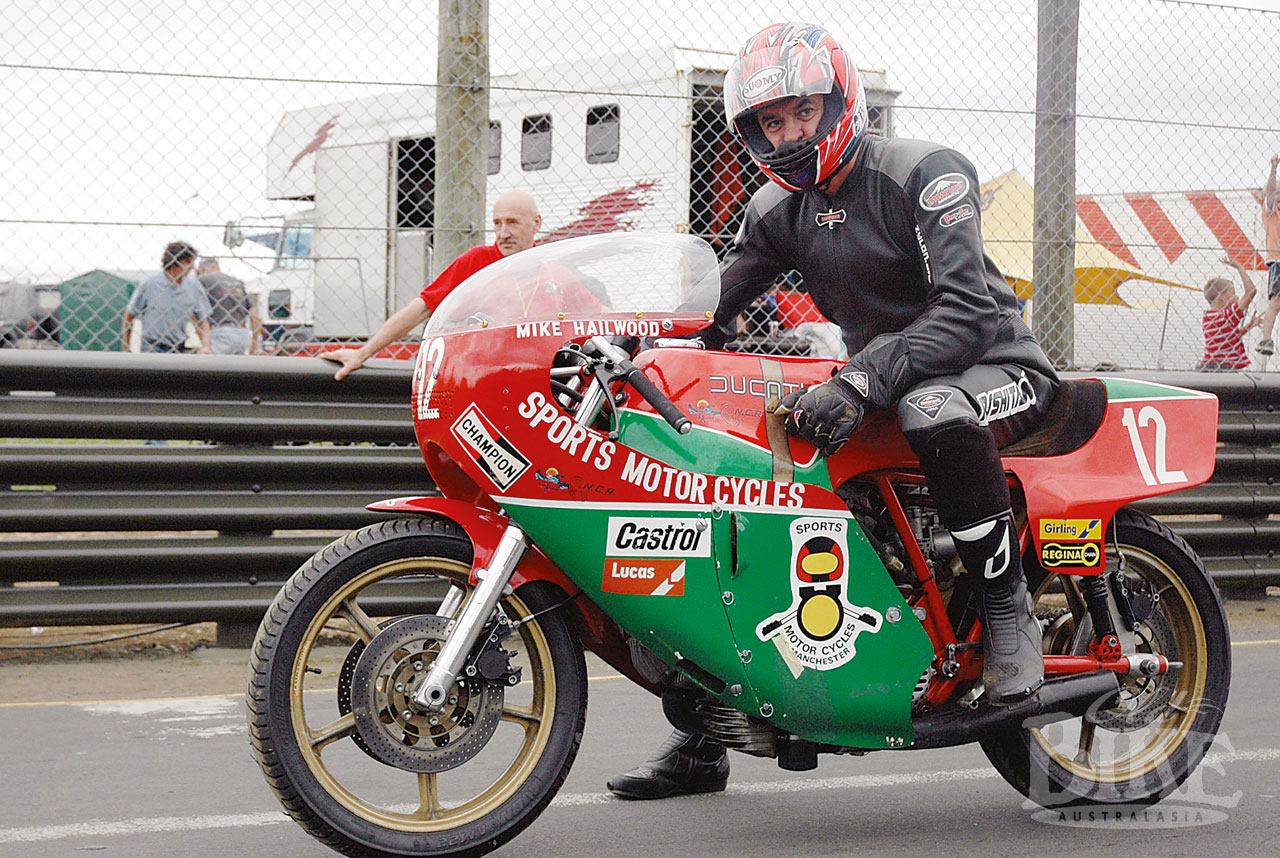 It’s uncanny how two supposedly identical bikes can feel so different. This NCR is fitted with Girling Gas Shocks, slightly longer than the original Marzocchis, which may have the effect of steepening the steering. It certainly felt more positive in the corners. The seat had also been built up at the rear with about 10cm of padding, giving a much more snug riding position. And then there was the engine. Not only did the Mike-bike sing happily past 8,000 rpm, it pulled four teeth less on the rear wheel, amounting to a fairly rapid rate of knots by the time the end of the back straight was reached. Once again, Paul Smart and I grouped up for one final show for the fans, although we were regularly blown out of the way as Andrew Stroud on the Britten or Steve Spray on the Rotary Norton rocketed past.

All in all, it was a glorious reunion for me with a couple of very dear and special machines. The last time the two NCRs had shared pit space together was at the 1978 Post-TT Meeting at Mallory Park, a round of the British TT Formula One Championship, where Mike famously blew away the cream of the day’s TTF1 talent, and I not-so-famously finished tenth, earning myself a cheque for Ten Pounds, which I still have – uncashed!

My thanks to Murray Kahler, Steve Wynne and the hard working members of the New Zealand Classic Motorcycle Racing Register for the opportunity to re-live my youth, and hopefully, entertain Ducati enthusiasts, of which there are legions in the Shaky Isles.

Footnote: Shortly after the Pukekohe meting, Kevin Grant was seriously injured while riding a Ducati Monster back to Melbourne from the Phillip Island round of the World Superbike Championships. Kevin sustained some major leg injuries and will be hospitalised for some time. Everyone at Old Bike Australasia wishes Kevin a speedy return to health.

Reunited with an old friend!

It was a fantastic expereince to get back on the Moreparts NCR Ducati at Pukekohe, and especially to play around with Alan Cathcart and Paul Smart on virtually identical bikes – 2580cc of Ducati power! And on a circuit that is in itself historic.

Then, in 2018, I got another chance to get aboard the old girl at the International Festival of Speed at Sydney Motor Sport Park. Even though the bike’s owner Murray Kahler was unable to attend, he made sure the NCR was well fettled throughout the weekend, and it looked and sounded brilliant. Mindful of a wet track and far-from-new tyres, I took it pretty easy but that unmistakable sound of the big Duke brought the memories flooding back. The bike was 40 years old at that point, so one must respect age!

Thanks to Mat Clancy for putting up this video. I’m sure the Ducati fans will enjoy seeing and hearing this wonderful motorcycle again. And also don’t forget the Old Bike Australasia Classic Challenge at SMSP next weekend – 20/21 March. This will be a great meeting with over 200 rider entries and around 300 bikes all eager to get racing again. And it’s FREE. Yes, just go to the main gate, do the QR code thing on your phone, and enjoy the noise. See you there.

It seems everyone was building 750s in the early ‘seventies, but few were as pretty as this one. Story and photos: Jim Scaysbrook • Original photos: Michael Andrews and Jeff Nield. By the time Fabio Taglioni’s […]

Story: Jim Scaysbrook • Photos: Keith Ward, Charles Rice, Ron Robinson, FoTTofinders. At the end of 1962, Ron Robinson was at the crossroads. He’d been racing in Australia since 1955, and had honed his skills to […]