Talk to Jonny Munn at his well-established classic bike outlet Classic Style Australia in the outer Melbourne suburb of Seaford, and you’d never guess that this quietly spoken man has spent a good proportion of his life blasting 450 horsepower nitro-fuelled drag bikes down quarter mile strips, reaching the very pinnacle of his game in the process.

Although he has a British accent, Jon was born in Melbourne. His father was in the RAF and with his wife, came to Australia post war. In 1956, the family, including young Jon, moved back to England where he began playing around on pushbikes before acquiring a 150cc James Cadet for just thirty shillings. “I pushed it home because I was too young to ride on the road, but as there was a large cornfield near us, I was able to tear around that when it wasn’t under crop. As soon as I got on a motor bike, I was finished; at school all I wanted to think about was bikes,” he says with obvious conviction.

Even before he had reached his teens he was buying and selling the odd motorcycle, and by age 14 had an old 500 Matchless that he stripped to ride in local scrambles. When he was finally of legal age to ride on the road, a BSA Bantam filled the role. As things happen, Jon returned to Australia in 1966, and landed a job with the National Bank. Before long he received a transfer – back to England, where he was stationed in the London branch. But a financial services career was not for Jon, and he quit the bank and went to college, where he studied engineering. Life continued on in a normal sort of way until one night, at a London party, his friends decided that they would all go to the Santa Pod drag races in the English Midlands the following day. “The moment I saw supercharged bikes in a real power sport I was hooked, and I just had to get into it. I got hold of an old Triumph Thunderbird engine and bought a frame from sidecar racer Pip Harris, and begged, borrowed or stole everything else to get it going. I got it on track for two hundred quid.”

Jon’s first season on the strips was 1972, when he competed in the Middlebike class. Despite the Triumph’s modest state of tune, he was soon getting into the 11 second bracket, but he wanted more. “I sold the engine and grafted in a 750 Commando which I ran on carbs first, then fuel-injected with Hilborn injectors. It was good for low 10 second passes at around 225 km/h. I reckoned that if one engine was good, two would be better, so with a bit of inspiration from Tom Christensen’s double Norton “Hog Slayer” and a lot of help from John Baker, who was chief development engineer at Norton, the new machine became a regular winner and was the quickest un-blown British-engined bike at 9 seconds.”

Jon and the twin Norton became 1978 British Superbike Champions, but at the end of the year he was forced to stop riding in order to buy a house. Fortunately for him, his close friend John Hobbs, one of the top men in the top end of the sport on his twin engine ‘Hobbit’ also decided to retire and offered Jon a partnership deal to take over the seat.

That was the break he needed and Jon and the Hobbit became the class act in Europe, amassing titles like the 1980 World Finals, British Superbike Championship, British Drag Bike Championship and Motorcycle Drag Racer of the Year. Mind you, the introduction to such a titanic motorcycle was not without its dramas. On his very first ride, the Hobbit got into a violent 180mph tank-slapper as he completed his heat, which he won to put him into the final against flamboyant Dutchman Henk Vink on his 2400cc Kawasaki ‘Big Spender”. “It was the nearest I ever came to crashing,” he says, but soon after he was back on the line for the run against Vink, losing by just 0.32 seconds. However the performance against the established star with his mega budgets had Jon acclaimed as the coming man in the sport – a prediction he immediately vindicated. 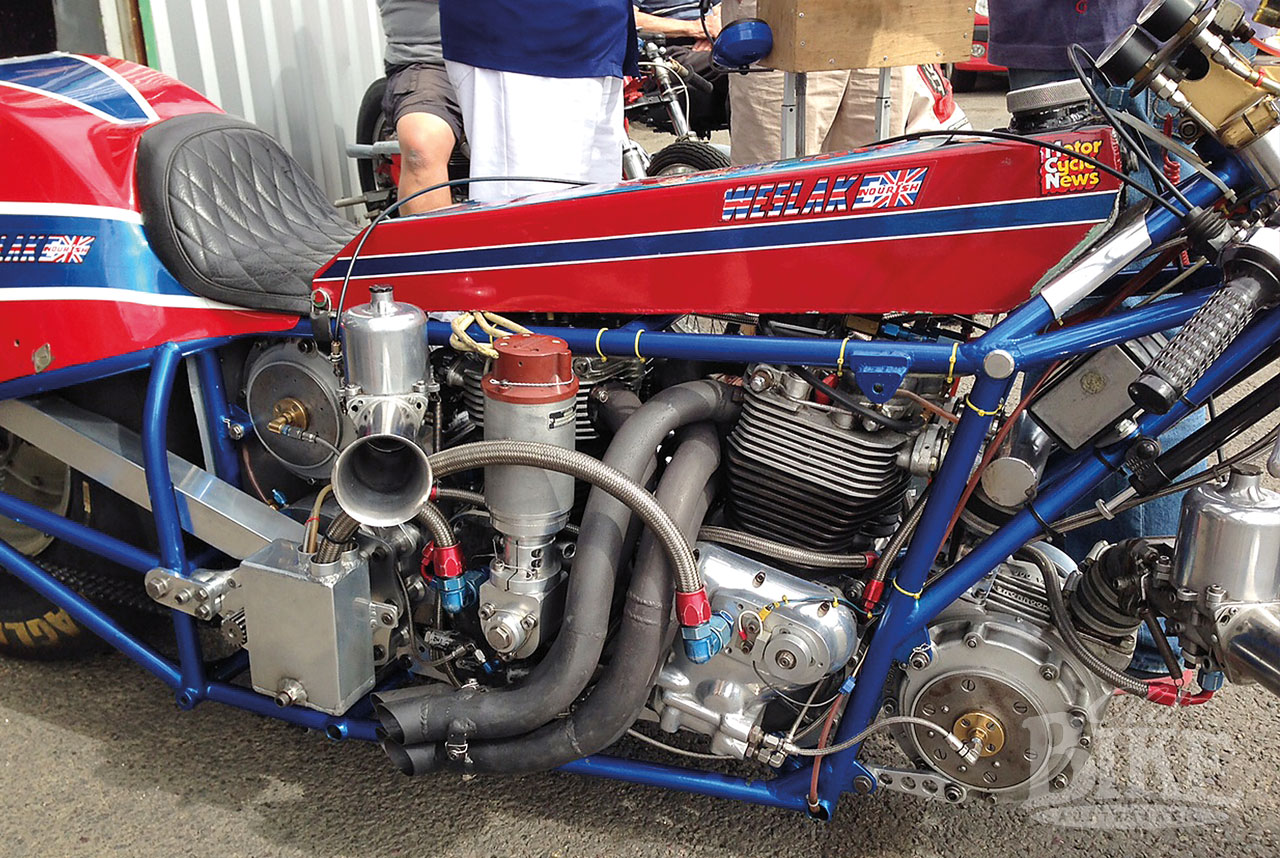 In its ultimate form, the Hobbit ran twin 850cc Weslake engines, each fed by a Shorrock supercharger and 2-inch SU carburettors gulping nitromethane supplied to the carbs by a Hilborn fuel pump.  Despite poking out around 450 horsepower in usual trim, Munn says the unit was very understressed and completely reliable, and provided him with his quickest-ever standing quarter mile – 8.02 seconds. When fully dosed up with nitro, he estimates the power output well exceeded 600 hp.

In 1989 Jon disposed of his UK Kawasaki dealership and with wife Maggie moved back to Melbourne, where he exercised his engineering skills working on Glenn Seton’s Ford Cosworth Sierra in the ATCC. After dabbling in other businesses, he opened Classic Style in 1996, which he describes as “the best job in the world, where you can also play at your hobby.” Classic Style has established itself as the hot destination for those looking for an historic machine, and with more than 400 bikes in an ever-changing display, you’d be hard-pressed not to find something that appeals. Jon makes regular trips overseas to purchase stock, some of which is restored in house, and others sold as restoration projects or ride-as-is to buyers. Jon and workshop manager Geoff Knott, who is the man responsible for the brilliant restorations that come out of Classic Style Australia, also make a formidable combination in Vintage Motocross aboard a Norton Wasp outfit.

And he still finds time to indulge his original passion of drag racing. In 2015, to mark John Hobbs’ seventieth birthday, Jon was invited back to UK for one more run on the Hobbit. So he packed his leathers (he still fits into his original suit) and he and Maggie returned to their spiritual home, Santa Pod Raceway, where he gave the Hobbit a few more gallops up the strip during the Dragstalgia festival. It was almost exactly 30 years since he last raced the machine. “It’s in my blood,” he says with a smile.

The rain eases a few minutes short of midnight but has already saturated the small knot of officials – their timesheets a sodden mess. A puff of wind does little to disperse the fog as […]

Tracks in Time: Parramatta Park – The circuit in the city

Show any motor racing enthusiast a set of roads that form a lap and the wheels start turning – literally and figuratively. In the days when Australia had no racing circuits built solely for that […]