There can be few, if any, two-wheeled creations that stir the loins like the Christchurch-built Britten V1000. Even when sitting still and silent, the machine boils with menacing beauty – it simply oozess panache.

Even now, nearly two decades after its birth, the Britten still exudes jaw-dropping charisma, every millimeter of its exterior revealing some superbly innovative way of treating what, up to then, had been an accepted practice. Sure, the brakes are positively ancient compared to the latest, milled-from-solid, radially-mounted gadgets from Brembo. Sure, the switch gear seems a little quaint. Sure, even modern road-going sports bikes feature wider, lower profile, grippier rubber. But in terms of sheer presence, of in-the-company-of-royalty trepidation, the Britten has few peers. 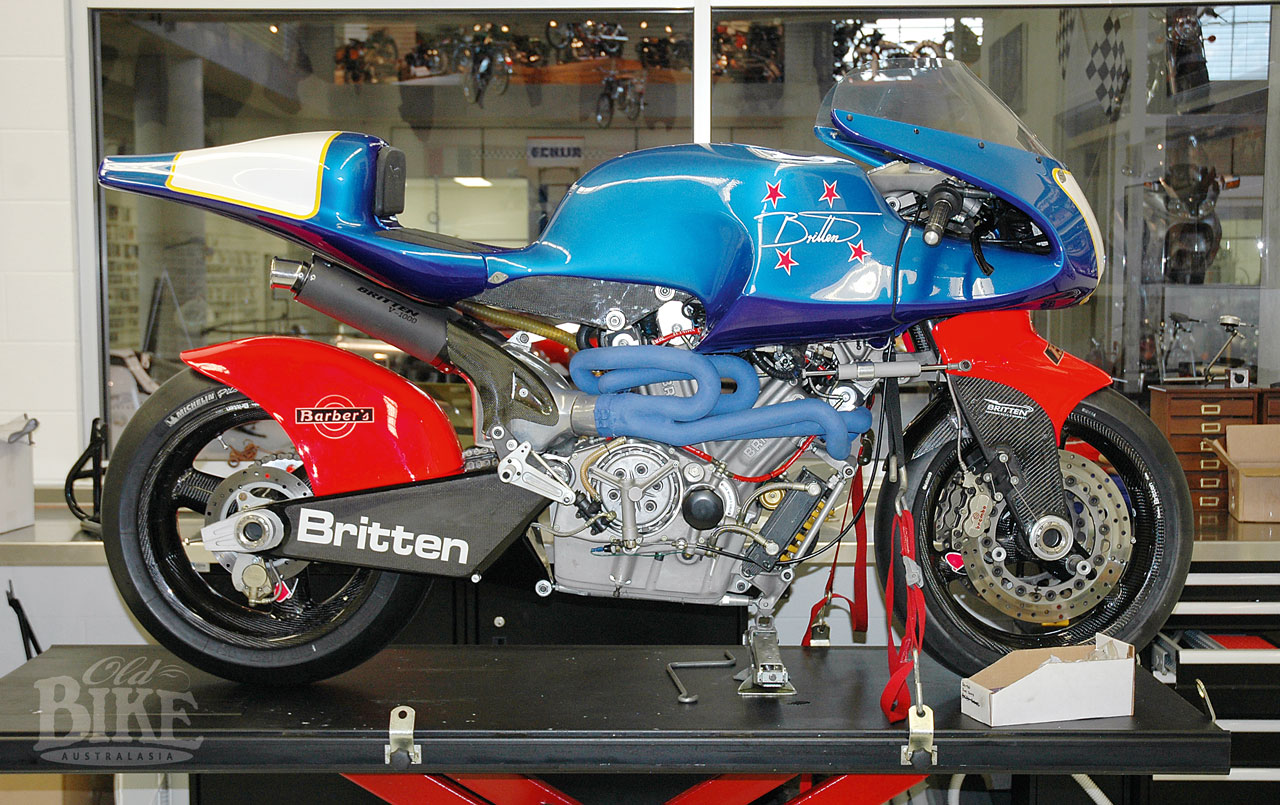 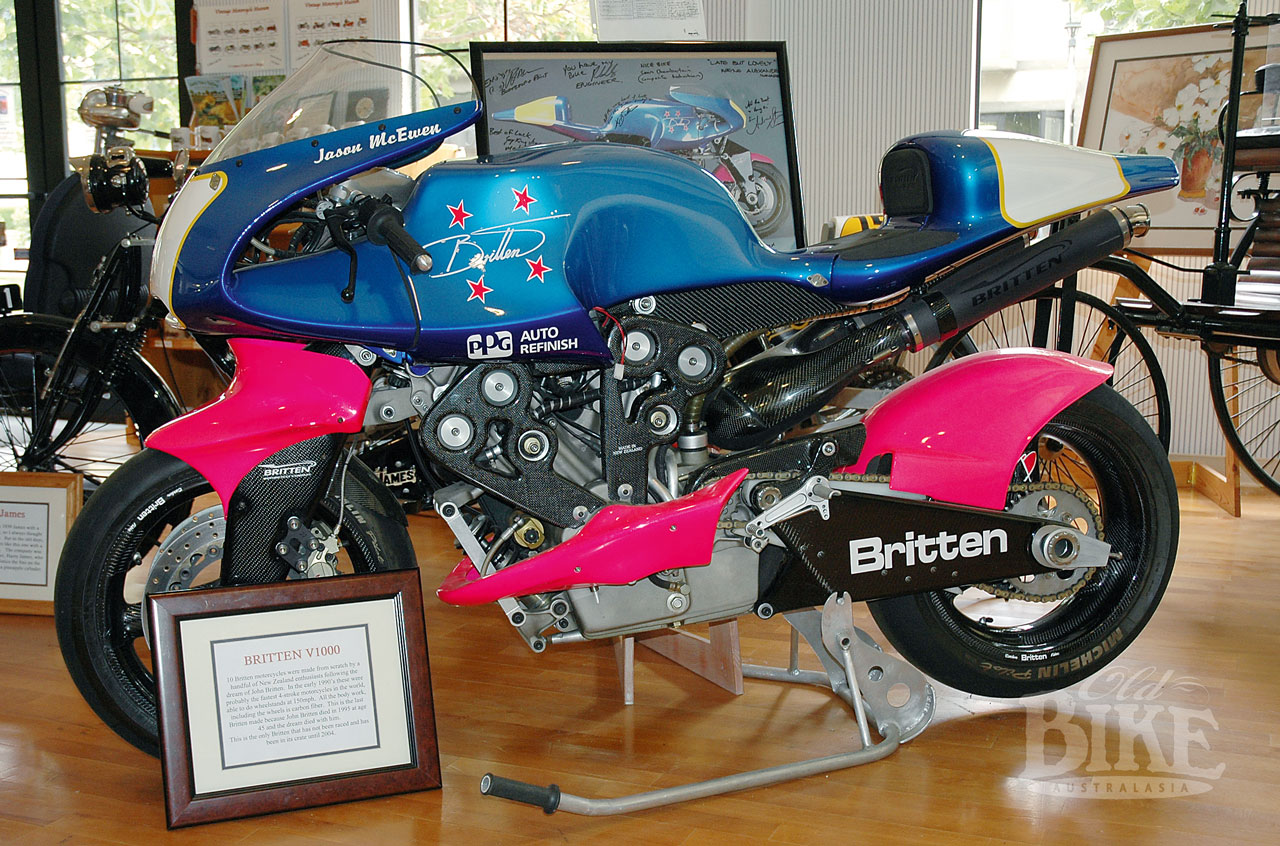 The story of the Britten V1000, and the creation of the ten fabled machines, originally priced at $100,000 and today probably worth three times that amount, is well documented. One of these ten, let’s call it number five, is owned by Kevin Grant from Auckland, a successful businessman who made his fortune in agricultural machinery, and chooses to enjoy the fruits of his labour by surrounding himself with some fabulous machinery. And Kevin’s Britten, unlike perhaps all of the other nine extant, is not cosseted in a glass case, or mounted on a wall. It is regularly seen in public, not as a static exhibit but as a roaring, snorting, track-taking rocket. And don’t the public just love it.

My annual visit to the Classic Festival at Pukekohe is usually enhanced by the opportunity to gallop something from Kevin’s extensive stable. The previous year it was a few of his many Nortons, and this time it was the opposite end of the spectrum – the Britten. The starting procedure itself is guaranteed to draw an audience, like jackals to a felled wildebeest. As the starter roller engages the rear tyre and the big v-twin begins to spin over with the clutch in, the sound of running feet almost drowns out the mechanical racket. At the moment of clutch release/ignition, an audible groan of ecstasy rises from the acolytes like a mass orgasm. This is motorcycle erotica personified. From my position in the saddle, cocooned in a helmet and somewhat isolated from reality, the moment the bike explodes into life is like being strapped to a lunar shot. All around were people poking cameras and holding mobile photos up so the folks back home could share the experience. Others simply swoon to the music from the twin pipes. Not that the Britten is overly loud, but the staccato rasp tells you there’s some pretty special stuff inside those cases.

With a few helping hands, the Britten is dropped off the stand, first gear selected (it is roller-started in third) and carefully I make my way into pit lane, keeping the revs up in order not to make a clot of myself and stall it. Feeding the clutch out, there is no shudder, shimmy or shake – this could be a 2010 Suzuki GSX-R1000. Now under way and out on the circuit, it’s time to give it some berries.

And here commences the first of the myth-debunking realities. Instead of a vicious, bad-to-the-bone, evil-tempered Visigoth, what we have here in a machine of impeccable manners and disposition – fast as blazes mind you, but sophisticated, urbane and amazingly easy to live with. Mindful that I only had a handful of laps during the lunch break, I decided to get straight into it. Around Pukekohe’s left and double right onto the back straight in third gear, I open the throttle and hang on. Whoosh! All of a sudden half the straight was behind me, and what was rushing up was the hairpin, which had been liberally coated in oil and now cement dust after the day’s events. Here we experience myth-debunk number two. Those ancient looking brakes are simply mind-snapping; absolutely vice-free and extremely powerful, they haul the Britten down from warp-speed to near running pace with consummate ease. Exiting the hairpin, it’s time to get set up for the secret to the quick lap around here – the rutted, rippled double left and rising right onto the front straight. Here comes the next revelation – the ripples seem to have disappeared, and seconds later, arriving at the rather scary, Armco-lined Turn One with its infamous crater right in the peel-off area, the Britten simply glides through the turn. No bucking, wallowing or any other form of protestation, glide is the only word for it. Whatever John Britten did geometry-wise and between the ‘girdraulic’ front end and linkage-operated rear, it just works. With the benefit of the previous minute’s experience, the second run down the back straight was achieved head down and tail up, with braking left many metres later, but still miles too early. Knowing where, and how hard to brake could only come with a lot more time on the bike than I had been allotted, and preferably on a circuit where there was far less scattered lubricant.

I just couldn’t get over how salubrious the ride actually was. The riding position, for me, was perfect – a proper racing crouch, but without the feeling that you were about to have your nose chamfered by the front tyre at the first touch of the brakes, as on modern sports bikes. The gearbox too, could not be faulted; the lever throw just long enough to transmit the feel of the engaging gear which was always a soft snick, not a clunk or even worse, no feel at all. Best of all, seeing as I had brought the bike back in one piece, I was offered a second session on the Britten the next day. Buoyed by the experience and with a new level of confidence, I had mapped out a few more daring things to try, especially as a bit of overnight rain had cleaned up the track. And so we went through the starting ritual once more; onto the roller, select third gear, pull in the clutch ready for the roller to spin up, and ‘snap’. The clutch cable broke. Damn! Probably the lowest-tech fitting on the whole bike and it had to choose this moment to throw a tanty. I could have cried. So could the assembled mob. There was no hope of changing the cable within the few minutes of track time that I had been given, and the Britten’s regular rider, Andrew Stroud, was due at the track soon to take over, so that was it for me. Later in the day, with the cable repaired, I watched as Andrew stood the Britten on the back wheel for the length of the main straight, and had a quiet thought that I must have looked like an L-plater on my run. But I sure didn’t feel like one. With the Britten roaring away under me for those few laps, I was, in the words of the late Vivian Stanshell – two separate gorillas!