The ‘fifties was the decade of the scooter – and not just the tiny putt-putts that zipped around on daily duties. Bigger and better versions kept appearing – a select few bridging the performance gap between scooter and motorcycling. One such was the cute and functional Zündapp Bella.

Pre-war, Zündapp was renowned for its powerful flat fours and twins, many of which spent years ploughing through the sand dunes and mud of the combat zones. Fast-forward a decade, and Zündapp, like the rest of Europe, was struggling back to life as best it could, given chronic shortages of materials and capital. Cheap, reliable transport was what was needed, and that, in European terms, meant scooters. 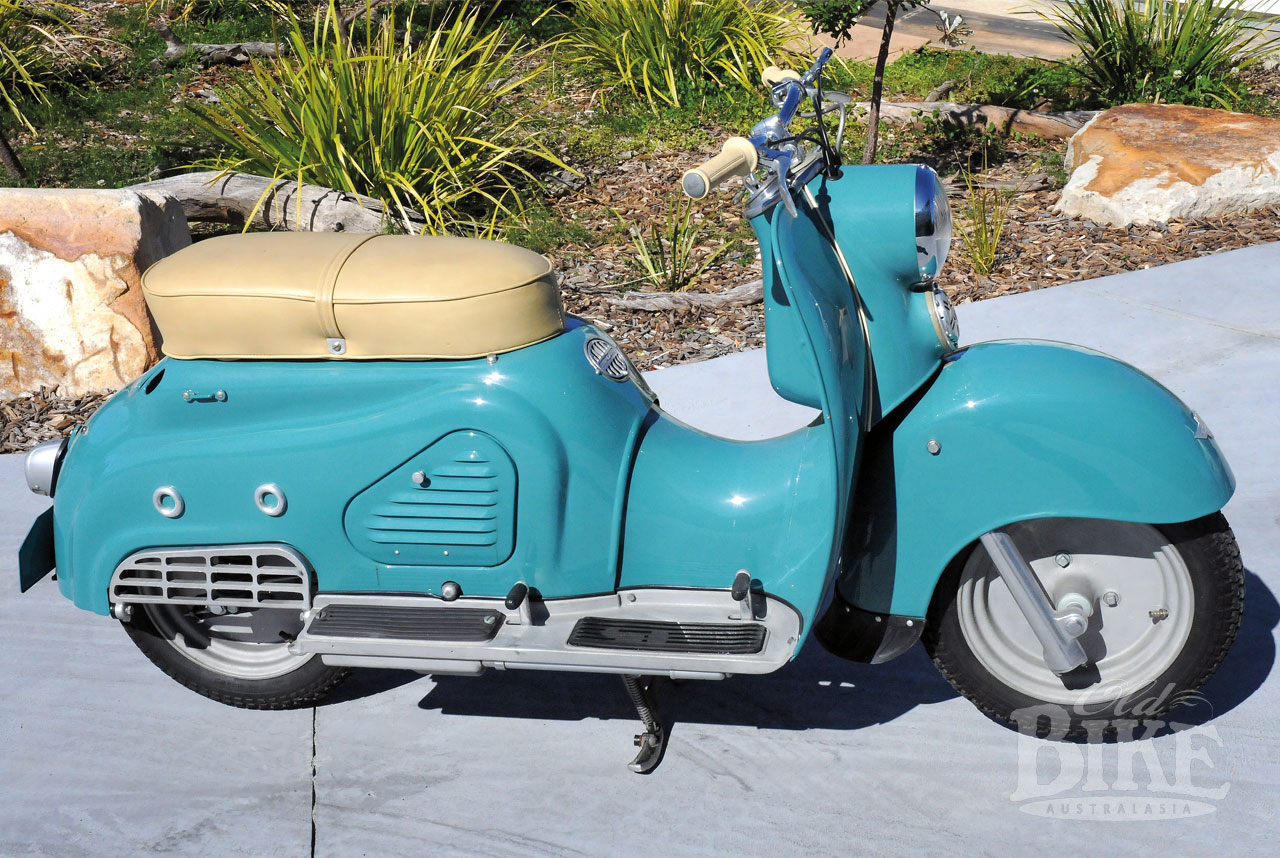 Borrowing a little from the ideas in the 1952 Parilla Levriere scooter, Zündapp launched the Bella, in 148cc form, in 1953. The Bella was to continue in production for eleven years, enlarged to 197cc in mid-1954. In 1956 the smaller model was given a slight increase in power, but could still claim a fuel consumption better than 100 miles per gallon.  It was virtually unchanged otherwise, and earned a well-deserved reputation for quality and performance. By the time production ceased in 1963, around 130,000 had been made.

Early versions had a leading axle telescopic front fork with one-way dampening, with solid 12-inch interchangeable wheels and 3.50 x 12 tyres. Big 6-inch brakes provided excellent stopping power. The engine was fitted with a kick-starter and 6-volt electrics. To assist with engine cooling, fresh air was channelled through the centre of the chassis into the engine compartment – a feature also found on the Parilla.  Sophisticated for a scooter, the Bella featured a four-speed, positive-stop gearbox, with the clutch hub being the pinion for top gear. The method of gear changing was also unique, with separate heel and toe levers for up and down changes protruding through the right side foot board. It also made riding a less daunting experience for those not familiar with the Lambretta/Vespa style handlebar twist-grip method of gear changing. 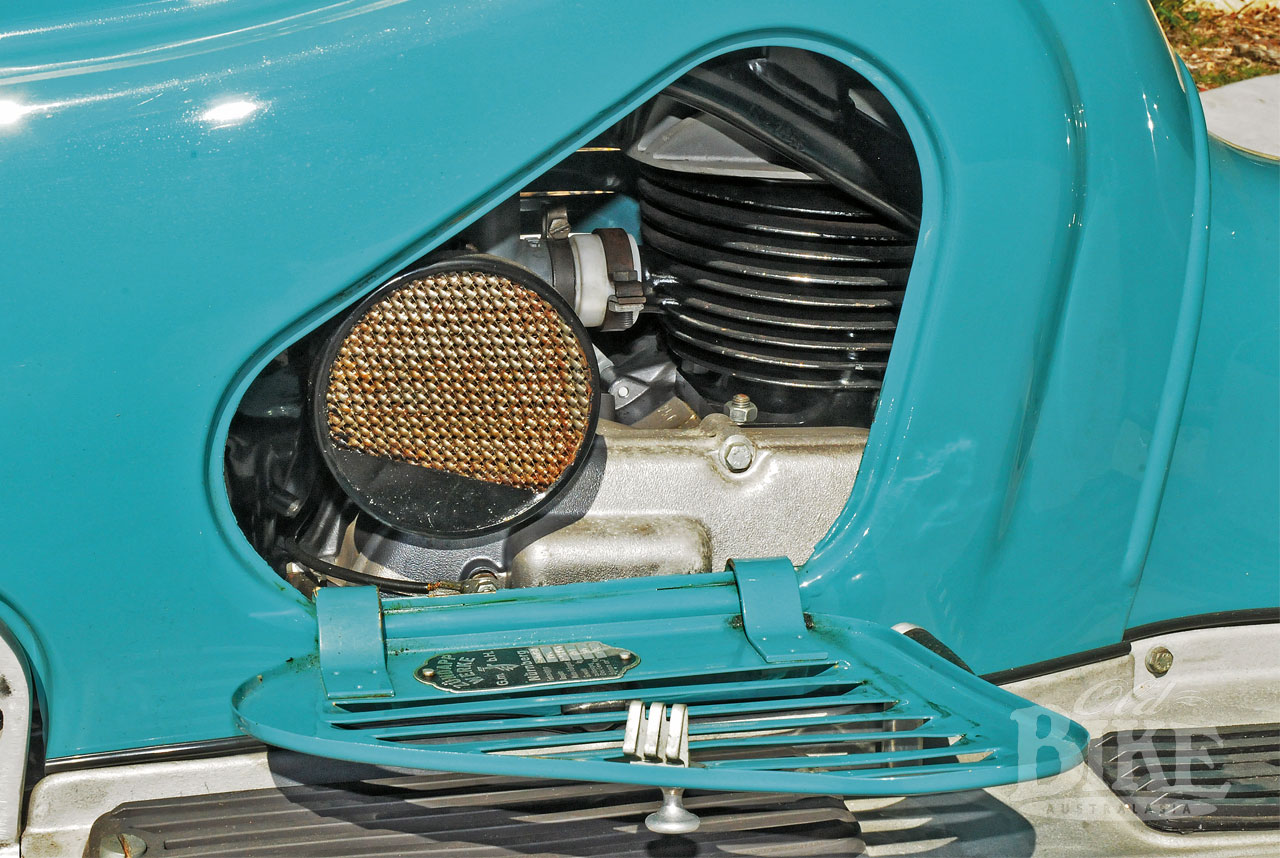 Unlike many other scooters, the Bella had conventional tubular handlebars instead of the cheaper-to-produce steel pressings, with a plush foam rubber dual seat. The greatest attention was paid to keeping rider and passenger clean and dry, with extra wide leg shields, a fully enclosed centre section, and full enclosure of the rear chain. The specification list was impressive: high and low headlight beam with a parking light, folding kick starter, side and centre stands, comprehensive tool kit, and plenty of chrome and polished alloy.

The scooter had come into being primarily to provide economical transport, particularly in densely populated and congested urban areas, but by the mid ‘fifties its traditional market was under concentrated attack by a new generation of small cars, notably the Fiat 500 Topolino (“Little Mouse”). European scooter manufacturers began to new eye markets – even the staunchly traditional USA, and Zundapp was one of the first to appoint an American distributor, the International Motor Cycle Company of New York. As well as the existing 150, a new bored and stroked 200, producing 10 horsepower, was introduced with the US in mind. Zundapp had stiff competition in the States, with Cushman, NSU, TWN, Lambretta, and Vespa all vying for a slice. The US-built Cushman made much of the fact that it was the only four-stroke scooter on the market, and required no ‘tedious and messy’ mixing of oil and gasoline.

The new 197cc model sported a 12 volt battery with an electric starter, although at a price premium over the 6 volt, kick-start 150 (US$389 versus $499). The 200 also weighed 32 kg more than its little sister. Leading link forks, with a single suspension unit on the right hand side, replaced the earlier telescopics on the 197cc model.

In 1954, John Galvin (who readers will remember as the long time Australian distributor for Craven Equipment, Belstaff clothing and Metzeler tyres) thought he should celebrate his fiancé Margaret Carters’ twenty-first birthday with a suitable gift. Not a bunch of flowers or a scarf, but a practical gift – a motor scooter. Hunting for a suitable machine, John’s first port of call was, naturally, the epicentre of motorcycling in western Sydney, Ryan’s of Parramatta, but this failed to reveal anything he considered suitable. Talking to his mate Bernie Pearson, who worked down the road in Church Street at Hilldon’s Holden, Bernie said he had seen a very pretty scooter in a dealer just a bit further up the road. It turned out to be a Zündapp Bella, one of the 148cc early models with telescopic forks.

A deal was struck and Margaret became the proud owner of a quite rare means of transport. But this was not just a ride-to-work bike, as Margaret was, and remained all her life, a very enthusiastic motorcyclist; a keen club member who was not afraid to get involved in weekend activities, along with John. In 1956, John entered the Castrol 7 Days Trial on his BMW, and not to be outdone, Margaret entered the Bella as well. The trial began from the forecourt of the NSW Art Gallery in Sydney’s Domain on Boxing Day, 1956 and travelled through Bathurst, Dubbo, Narrabri, Inverell, Gunnedah, Cessnock, and back to the finish at Windsor on New Year’s Day, 1957. Of the 52 starters, four were women, but Margaret was the only entrant mounted on a scooter. She was on course to finish the event without loss of points, only to have the battery fail on the Bella. The delay cost her 16 points but after a replacement battery was quickly sourced, she had the satisfaction of actually completing the course and receiving a trophy for her efforts, which was presented at the Awards ceremony at the Trocadero in Campbell Street, Sydney on 6th February, 1957.

Soon after the trial, Margaret and John decided on a trip to England, where they were to remain for three years before riding back home overland on a BMW R50 that is still in the Galvin family. The Bella was reluctantly sold prior to departure, but not forgotten. Many years later, with John Galvin now entrenched in his growing business at Guildford in western Sydney and Margaret busy with the upbringing of their three sons, John began the process of tracking down the Bella, which he eventually located in Adelaide. A purchase price was agreed and the little blue machine was once again back in Sydney, where it was completely restored.

After 57 years of marriage, Margaret and John Galvin passed away within three weeks of each other in 2014, but the Bella is still in the Galvin family, along with the much-travelled R50 BMW and John’s 98cc Zündapp ISDT Replica.

Story & photos: Jim Scaysbrook In the tiny country of Slovenia, which has been invaded, annexed, carved up and pushed around for centuries, it’s a miracle anything has survived. Almost destroyed in the bloody […]

Kapooka – A one-off in Wagga

Story: Jim Scaysbrook • Photos: Frank Shepherd When Mount Druitt disappeared in November 1958, it left NSW with just one operational road racing circuit – the once-a-year bash at Bathurst at Easter. This had the effect […]