Age and veneration do not necessarily go hand in hand, especially in a mechanical sense. Some brands never reach iconic status, no matter how enduring they may be. Ducati is not one of these.

Whatever the venture into Moto GP may have cost the Bologna company, it must be considered worthwhile, for it has rocketed the Ducati name into the stratospheric plateau of the world brand, not just amongst its peers in the motorcycle and automotive world, but as a name of global significance alongside the labels adorning high fashion, fine wines, jewellery and watches. This is not to denigrate Ducati’s achievements in World Superbike, which are unsurpassed, but when it comes to the publicity stakes, Moto GP wins hands down. 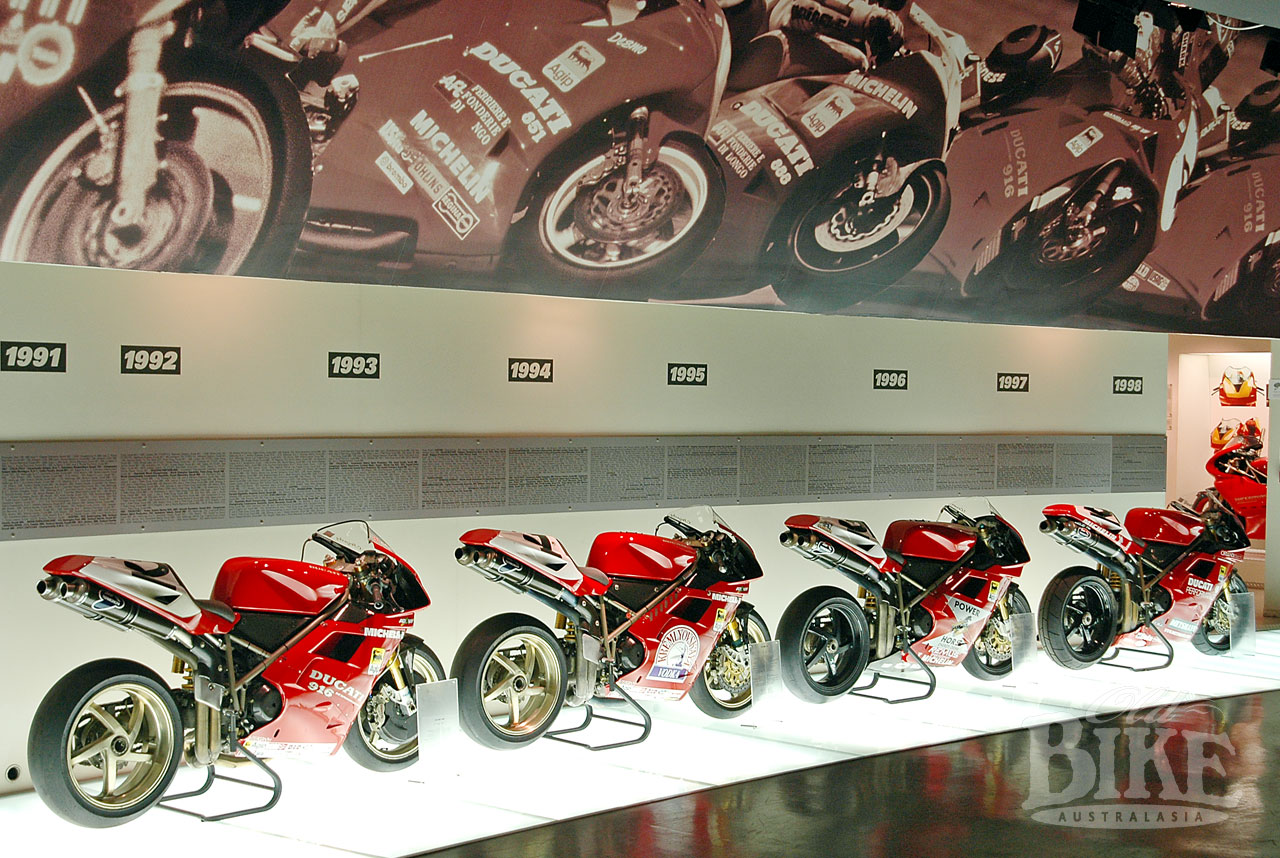 Owner loyalty to Ducati borders on religious fanaticism, and the company itself is certainly not ignorant of this fact. Pilgrims flock to the now-historic Bologna factory in their thousands to bathe in the mystique of the brand. Forgotten are the grim times of not so long ago when Ducati lurched from pillar to post, struggling for survival and with jackals snapping at its heels.

A significant milestone in the brand celebration came with the establishment of the Ducati Museum around ten years ago. Even though the factory has always been cramped, it was deemed unsuitable for the museum to be located anywhere else but within the complex itself, rather than off-site. Located on the top floor of the main factory building, the Ducati Museum is a tightly confined, circular structure complete with its own small auditorium and the mandatory and well-patronised merchandise shop. Doubtless, there will be expansion for the museum, and maybe even relocation, for the collection is almost entirely examples of competition models, and to include the enormous number of road-going Ducatis would increase the numbers tenfold.

The museum is under the curatorship of Livio Lodi, a colourful character who is not only an expert of the factory’s history and achievements, but a very knowledgeable war historian. Lodi maintains a strict mantra for the bikes in the collection – they must be winners, not just examples. Hence, in the lineup of Moto GP Desmosedicis, there is no 2004 model – when the team failed to win a race. 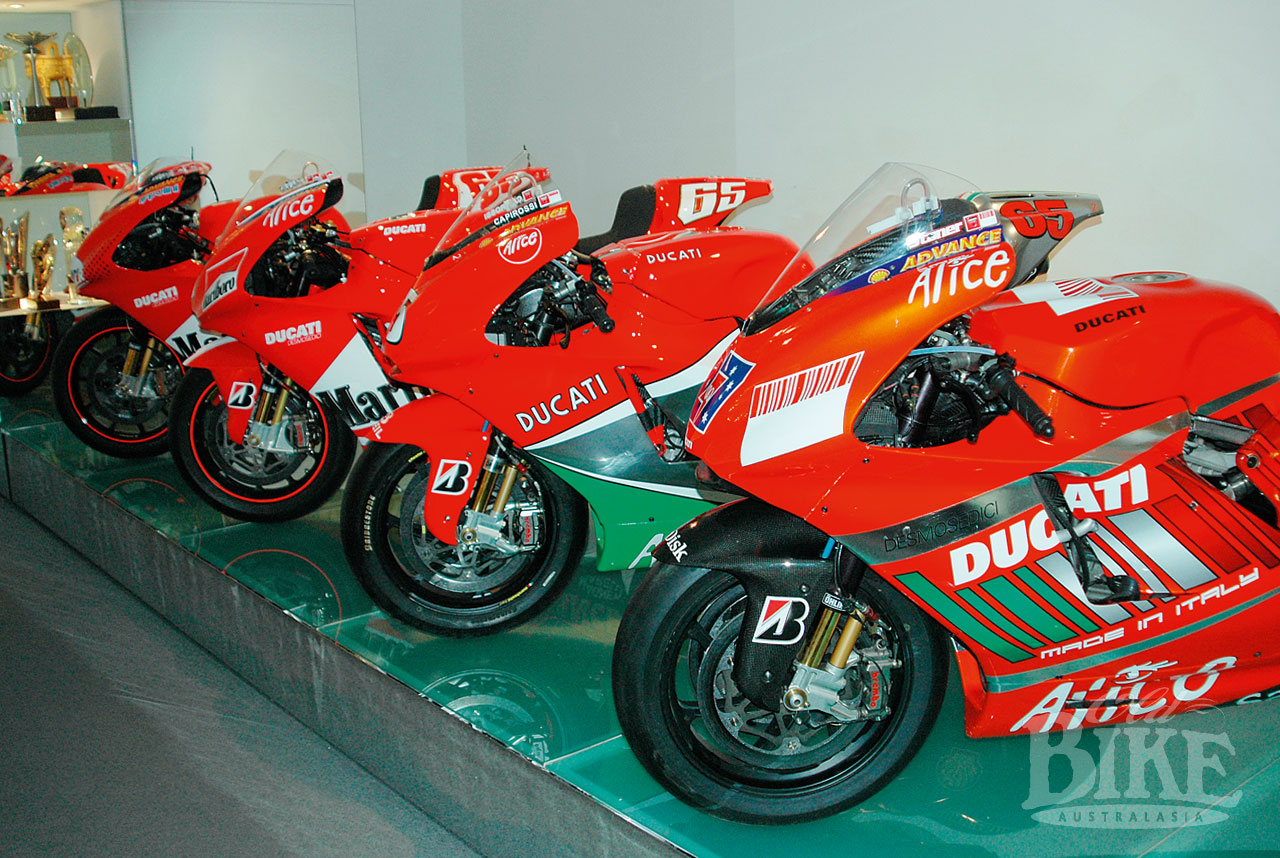 The collection begins at the beginning – with the early racing examples of Il Cucciolo – the Little Pup – the 48cc model that began life as a clip-on powerplant for bicycles. The dynasty continues through the early Taglioni-designed Gran Sport models – the forerunners of the famous Ducati singles, and into the sixties with the parallel twins that scored so much success in the hands of a young Mike Hailwood. Of course, the collection would not be complete without the Hailwood TT winner of 1978, and even when the real one is away on duty somewhere (as it was at the time of my visit) they have a replica to take its place, sitting alongside Paul Smart’s Imola 200 winner from 1972.

To the younger amongst us, the eighties was where Ducati really got going, with the advent of the new-generation belt-driven DOHC four-valve Superbikes beginning with the 851 and running through to the 999. Numerous examples of the WSBK winners are on display, with rows of trophies, race suits and helmets and other memorabilia from over half a century of successful competition.

The Ducati museum and factory are both open for guided tours, by reservation only, six days per week, and are conducted free of charge, which leaves you with spare cash to spend in the merchandise shop. It’s a memorable experience that leaves you in no doubt that when it comes to success, passion plays as big a part as engineering prowess.

Check out this great video of Jim Scaysbrook as he gets aboard the Moreparts NCR Ducati that he rode at the 1978 Isle of Man TT and does a lap with the GP Legends at the 2018 International Festival of Speed at Sydney Motor Sport Park.

Story: Jim Scaysbrook • Photos: Keith Ward, Charles Rice, Ron Robinson, FoTTofinders. At the end of 1962, Ron Robinson was at the crossroads. He’d been racing in Australia since 1955, and had honed his skills to […]

Story and photos: Jim Scaysbrook Ducati did some strange things in the 1960s, struggling, as it was, to remain in existence. In fairness, many, if not most of the shots were called by its American distributor, […]

Tom Phillis: A bridge too far

Story: Jim Scaysbrook • Photos: Charles Rice, Keith Ward, Tom Perry The feeling of disbelief that followed the death of Tom Phillis on the Isle of Man in 1962 was palpable. How could Tom, fast […]