‘Super Six’, ‘X6’, “Hustler’ – depending on what country you were in, the Suzuki T20, introduced in late 1965, went by many names. But quite simply, it was a sensational motorcycle – the first production six-speeder. In the days when 100 horsepower per litre was considered the yardstick for engineering achievement, the T20 went far beyond, with a shade under 30 bhp from 247cc. It was a long step from the company’s 250TB model of 1962; a 250 twin with a pressed steel frame, fully-enclosed rear chain and even white-wall tyres that was later updated to the still fairly pedestrian T10.

The T20’s specifications were mouth-watering stuff for quarter-litre buffs that were only just getting used to the new breed of Japanese two strokes, notably the Yamaha YDS2, that had unseated the Honda CB72 as the performance machine in the category. Beside the six-speed transmission, the T20 came with a twin-leading shoe 8-inch front brake that really worked, well-damped front forks (although the rear shock absorbers were typical Japanese jelly of the time) aluminium-alloy barrels with cast-iron liners, 12-volt electrics, quick-action throttle, twin 24 mm carburettors, and Posi-Force lubrication.

Posi-Force? Yep, a brand new name for a system that had been around for nearly 40 years since Velocette invented it for their two-stroke range in the 1920s. Velo carried the oil in a compartment in the crankcase, while Suzuki’s version used a separate oil tank and pump that metered oil according to even revs and throttle opening. Oil was fed directly into the main bearings at either end of the crankshaft, whereupon the lubricant travelled through the crankpins to the big end bearings and then into the cylinders. The centre main bearing was lubricated by gravity-fed oil from the transmission. Although Posi-Force was trumpeted as a world-first at the time, the Velo Fellows noted sagely amongst themselves, but Posi Force did indeed do away with the old two-stroke bugbear of mixing oil with fuel, and of the disastrous consequences of forgetting to do so. 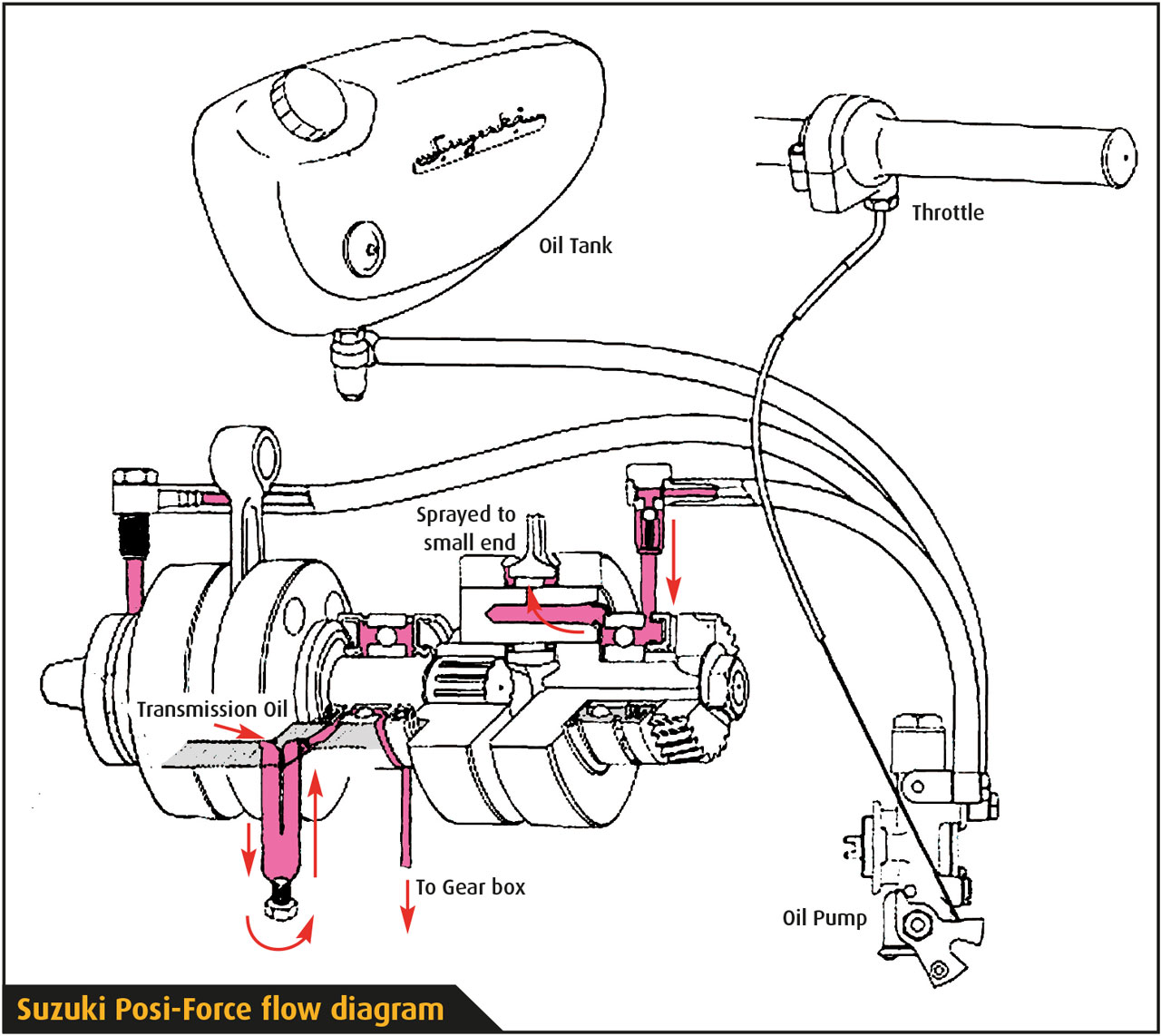 Other nice little touches included a magnetised oil filter in the base of the oil tank, sideways and vertical adjustment for the headlight beam, and spare jets in the tool kit. Optional extras included turn indicator lights and a choice of raised or low handlebars.

Not surprisingly, the T20 was an instant hit from the time it was officially released in May 1965. First deliveries to Australia did not arrive until very late in the year, with a local price tag of £285/10/-, which became $569 as of February 14, 1966. At the height of its popularity the factory was churning out nearly 5,000 per month, although the total production run world wide amounted to 35,500 in just over three years. As well as the conventionally style roadster, a street-scrambler, called the TC250 or X-6 Scrambler appeared in 1967; identical to the T20 except for upswept exhaust pipes with heat shields. USA models also used a different tank and seat, and towards the end of the T20 production, a ‘GP kit’ which simply comprised the Scrambler’s tank and seat, was also fitted by dealers to the T20 in USA.

“Hustler accelerates like there’s a cyclone in the tank!” So shrieked the sales brochures, echoed by numerous road testers around the world. It certainly was a quantum leap from the lumbering T10 that the T20 replaced. Factory literature claimed the T20 would cover the standing quarter mile in 14.82 seconds – or nearly half a second faster than the Honda CB450 which was at that time, the largest machine in production in Japan. The US Cycle World magazine managed 15.3 seconds for the standing quarter, with a terminal velocity of 84 mph (135.2 km/h) and a top speed of 92 mph (148 km/h). The T20’s biggest selling point, the six-speed gearbox, featured a positive-stop for neutral in downward changes, apparently to safeguard against shifting from second to first by mistake. Cycle World also criticised the gearbox operation, saying it was ‘uncertain’ with a jerky clutch operation.

By the mid-1960s, the 250 Production Class was a hotbed of action at most Australian race meetings, with the Yamaha YSD2/3 as the dominant force after displacing the Honda CB72. Also sprinkled throughout the field was the odd Ducati Mach 1, Bultaco Metralla and even a Bridgestone DT175 or two, but as soon as the Hustler arrived it went straight to the top of the class. In the May, 1966 open meeting at Oran Park, Ian McLeod riding in his first open road race, led home a Hustler 1-2-3 in the Lightweight Production Race, with Chas King and Stan Ayres taking the placings.

In the 1966 Isle of Man Lightweight TT, Australian Barry Smith took a virtually standard T20 to 12th place, averaging 82.88 mph against full-on racing machines. The T20 was fitted with road mufflers but used Girling rear suspension units and Dunlop racing tyres. Both stands, headlight, generator and air filter were removed, with a fibreglass fuel tank and fairing. The following year in the Production 250 TT he placed 3rd at an astounding 86.29 mph race average and repeated the placing in 1968, with Kel Carruthers 7th on another T20.

Locally, the T20 launched the careers of many top riders, including twin brothers Richard and John Steain. John’s T20 did service as his road transport as well as his weekend racer, and although it was four years old and superseded by the T250 ($619 locally), he entered it in the inaugural Castrol Six Hour Race (or Castrol 1000 as it was called then) at Amaroo Park in October 1970 with himself, Warren Willing and Steve Ashkenazi as riders.

“I worked at (Suzuki distributors) Hazell & Moore at the time, but I couldn’t get any genuine exhaust gaskets,” recalls John. The non-original ones we had to use for the race kept flattening out, allowing the nut holding the exhaust pipe to the cylinder to unscrew. We had to stop several times to tighten this up and still finished third in the 250 class, but I guess we would have won it otherwise. After the race, I put the plates back on the T20 and rode it home. Initially the T20 was quicker than the new T250. The older model was a bit lighter but the T250 had been designed to also take a 315 top end so the rods were sturdier, little end eyes were larger and the crank was heavier. But within a couple of years they redesigned the T250 and it was just as quick if not quicker than the T20, with bigger (26mm) carburettors.”

“I never had any problems with gears wearing, although if you blew a crankshaft seal, the gearbox oil got sucked out into the crankcase and the gearbox ran dry. One problem was if you didn’t decoke the engine regularly, the head gasket would squash out and bits of aluminium would fall into the motor and ruin the big ends. We used to use the head gaskets for the first oversize bore (+1mm). These would not protrude into the cylinders. As the engines get old the carburettors wear oval in the bodies so you can’t get the carburation right, and also the float bowls warp where they seal onto the carbs. Steve Ashkenazi is restoring a T20 and found that the 24mm carbs off the one of the Indian Royal Enfields will fit and you just need to re-jet them.”

The T20, now more than 30 years old, is not easy to find, but eminently collectable nonetheless. Most parts are obtainable from the various Suzuki retro specialists around the world, and locally from Suziparts in Adelaide. Increasingly, the later 250 twins like the T250 and GT250 are to be seen in rallies, but the T20 was the one that started the ball rolling, and if you had one in the late ‘60s, chances are you could be found out on the twisty back roads, hunting for prey like YDS3s or Kawasaki Samurais.

Spectacular and successful throughout his long and varied career, Ray Curtis never had top machinery, but that didn’t stop him always putting on a show for the paying public. Story: Jim Scaysbrook •  Photos: Dick […]

Peggy Hyde: Rebel with a cause

Unfazed by reputations, officialdom, or rules, Peggy Hyde showed that gender is no limiting factor in motorcycle racing. Talk to Peggy Hyde today and it is immediately evident that little has changed in her approach […]