A truly unique motorcycle with a split personality; the Böhmerland was the product of the fertile imagination of a Bohemian engineer, incorporating features designed to allow the machine to cope with an environment totally devoid of decent roads and creature comforts.

Over the centuries, Bohemia has had many rulers, so it is not surprising that it suffers from somewhat of an identity crisis. For example, the language spoken could have been German or Czech, and many products were marketed with names for both. Nowadays, Bohemia is part of the Czech Republic, bordered by Germany, Poland, Moravia and Austria, with around 6 million inhabitants. This polyglot environment is how a motorcycle designed by Albin Liebisch came to be sold under two names – Böhmerland (Bohemian Country) in Germany and Čechie in the Czech dialogue.

Liebisch was born in Rumburk, the son on a gardener, and in 1985 the family moved to Krasna Lipa in northern Bohemia where his father founded a very successful gardening business and built greenhouses. Fighting on the eastern front in WW1, young Albin was injured and after hospitalisation, transferred to a job in war production in Koprivice.

In 1923, Liebisch, who had very fixed ideas on what a motorcycle should be, set about designing and manufacturing his own machine, which we shall refer to as the better known Böhmerland for the purposes of this story. His well-equipped and self-contained factory was established in Schönlinde, Sudetenland, with a staff of around 20. Understandably, given the nature of the local terrain, Liebisch wanted his machines to be strong and reliable, and to all accounts, they were. Other motorcycles of the time suffered broken frames, collapsed wheels and mechanical failures due to the atrocious roads, so Liebisch created the specification he felt would endure these hardships, even if it meant breaking with most if not all conventional thinking. Mind you, he had plenty of competition, with over 200 different foreign makes, plus domestic competition from the likes of Jawa, Premier, Bekamo, Praga, Grizzly, B.D., C.A.S., Itar, Aeros, B.V., Walter, Satan, J.F.K., Velamos, Poustka, B.A.F., Koch, Sirocco, M.B., Orion, Met, Velox, and J.A.C. All these companies were much larger than Böhmerland, yet it remained in production for 15 years.

The original engine which was designed in 1923 was a 598cc overhead camshaft single with a bore and stroke of 79.8mm x 120mm. It was straightforward and simply constructed, yet quite powerful for the day, producing 16 horsepower at 4,000 rpm. This was progressively increased to 25 horsepower by the mid 1930s. A German Bosch magneto provided the sparks, with a British Amac (later Amal) carburettor, a 3-speed Sturmey-Archer gearbox, Framo saddle and a frame constructed from Mannesmann tubing. The frame was highly unorthodox, and came in two versions. The shorter wheelbase ‘touring’ model was called the Jubilee, with the fuel tank above the top frame tubes, while the extremely long wheelbase “Tourster” had two separate fuel tanks mounted on either side above the rear wheel. To add to the already considerable overall length, a substantial luggage box was located behind the rear wheel, suspended from extensions to the top frame rail. This model was fitted with a dual seat for rider and passenger, plus an auxiliary seat over the rear mudguard for a third person. Believe it or not, there was even a competition version – the Racer – which was a tuned and lightened version of the Jubilee. The Racer, which was intended primarily for hill climbs, was good for a reputed 92 mph, while the Jubilee did 80 mph and the heavy Tourster topped out at 75. 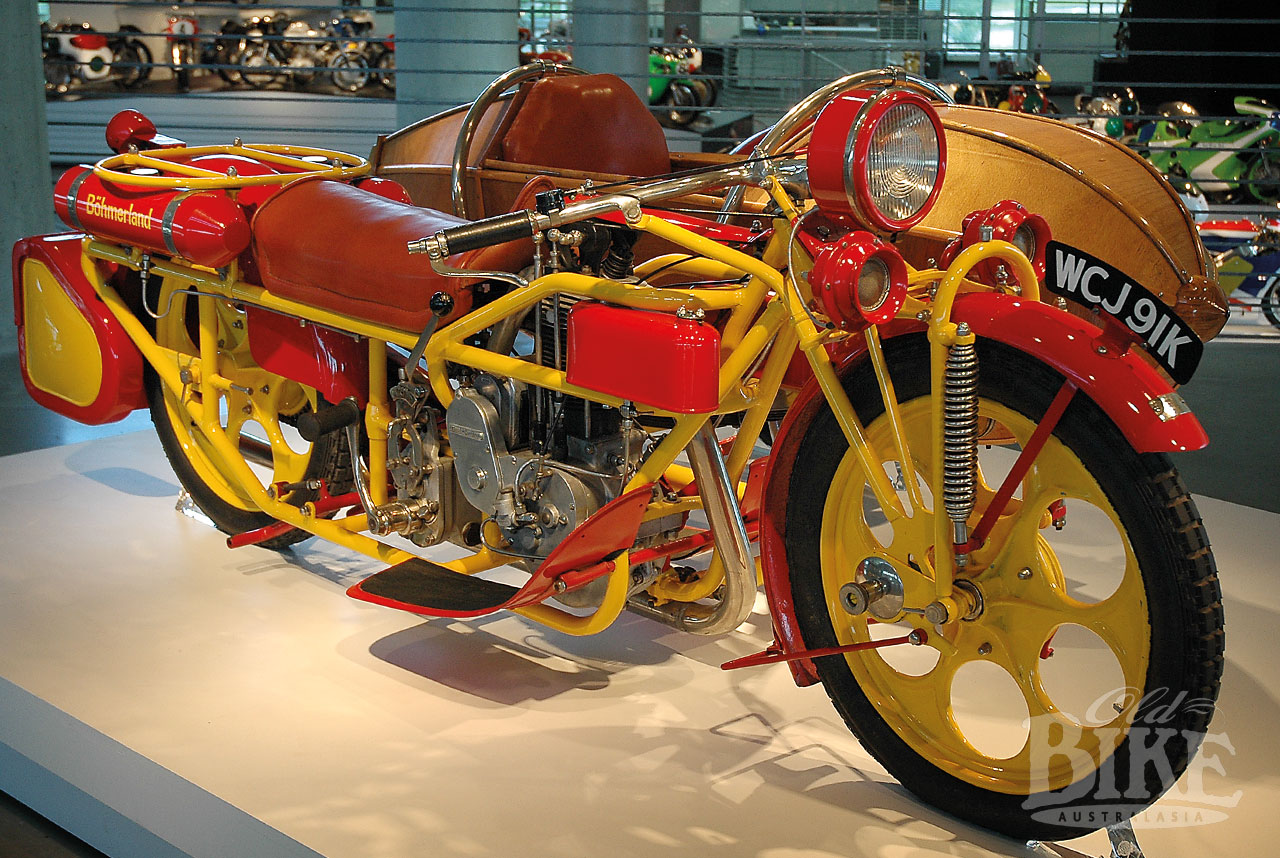 The Böhmerland was notable for having cast alloy wheels – the first production motorcycle to do so – which Liebisch claimed were far more durable, and superior to the conventional spoked type on the local tracks and roads. The tubular steel frame was massive in construction, with enormous and immensely strong leading link forks controlled by coil spring and friction dampers.

The motorcycles were individually hand-built to order, so the specification was liable to alter slightly between machines, and every completed bike was rigorously tested by the man who designed it. Only when Liebisch was completely satisfied with every aspect of the product would the customer take delivery of his motorcycle. The company had no dealer network; every motorcycle was ordered and delivered directly from the factory. Liebisch had such faith in his products that he competed regularly and with some success.

Throughout its existence, the 600cc engine changed little in appearance, and always retained open valve gear and exposed pushrods – anything but oil-tight.  The connecting rod was hand forged, drilled from the bottom to the top with holes of different sizes according to the decreasing width of the rod. Despite the ‘Swiss cheese’ appearance of the rod, the designer claimed total reliability, even in the racing engines which had even bigger holes. “Liebisch-Motor” was proudly cast into every drive side crankcase.

Although dedicated to his big four stroke, Liebisch realised that the austere times of the early ‘thirties required a different product, which he set about designing. The power unit was a 350cc two-stroke, which he called the “People’s Motorcycle”. It was reputedly a reasonable engine, but saddled with another unorthodox and very heavy chassis. His patented powerplant was economical to run, and capable of respectable performance, but it wasn’t powerful enough to haul such a weighty package. In a conventional frame this engine could well have set the little factory on the path to greater things, but Liebisch was an engineer first and a businessman second. Only a handful of the two strokes were built, while the factory continued to churn out the larger models. There was even a military model produced as a prototype, with twin Hurth gearboxes. Ironically, it was the worsening political situation that led to the demise of the Böhmerland in 1939, with a total production of around 1600 motorcycles built.

Liebisch had planned to resume motorcycle production at the close of WW2, but fell foul of the Soviets and ended up in a labour camp in a Czech gulag at Kamenice, when he and his son Richard were interred. They managed to escape in 1946 and ended up in Passau, Germany, where Albin began producing hand trucks, always with an ambition to return to motorcycles. Thanks mainly to Richard, the Böhmerland marque briefly reappeared in 1952 with a streamlined, low-slung model powered by a 198cc Zundapp engine, but it failed to go into production. Suffering deteriorating health in later life, Albin Liebisch died in Passau in 1965.

The SR60 was one man’s dream of building an all Australian machine to beat the ESOs, Jawas and JAPs that dominated the sport. Story: Dave Basham with input from Steve Magro, Alan Jones • Photos: Jim […]

Spectacular and successful throughout his long and varied career, Ray Curtis never had top machinery, but that didn’t stop him always putting on a show for the paying public. Story: Jim Scaysbrook •  Photos: Dick […]

Tracks in Time: Salty Creek – Hotbed of the Hunter