What is it about motorcycling that makes us so passionate about it? Sure we have our different tribes: Harley owners, Ducatisti, Adventure Bikers, Café Racers, etc. But it doesn’t matter which tribe you belong to, we all share a common passion for riding and owning motorcycles. In that respect we share a Quality culture. Let me try to explain.

If you were into riding bikes back in the 1970s there is a fair chance that you got to read a book written by Robert Pirsig (Born 1928 – Died 2017) with the intriguing title ‘Zen and the Art of Motorcycle Maintenance’ (ZAMM for short). The blurb on the back cover said that this book will change your life, and for me I think that it did. But it is a challenging book to read as it constantly shifts between telling the story of a motorcycle trip Pirsig made with his son; reflections on significant episodes in his former life as a teacher, including the electric shock therapy he had as treatment for mental illness; and some philosophical rambling about the concept of Quality:

“Quality…you know what it is, yet you don’t know what it is. But that’s self-contradictory. But some things are better than others, that is they have more quality, but when you try to say what quality is, apart from the things that have it, it all goes poof!…Obviously some things are better than others…but what’s the “betterness”?…What the hell is Quality? What is it?” (ZAMM, p184)

This question really got under my skin and so being a keen motorcyclist, following Pirsig’s lead I decided to take a closer look at the idea of Quality using the motorcycle as a metaphor for it.

In ZAMM Pirsig draws a distinction between what he called the ‘classic’ (objective) and ‘romantic’ (subjective) aspects of Quality.  For example, a motorcycle can be classified as ‘a classic’ by it satisfying certain specified (objective) quality criteria, such as the Honda CB750 or Yamaha DT-1 epitomizing a new class of production motorcycle, or a BSA Gold Star or a Velocette Thruxton being ‘classic’ examples of the British 500 Single. Or, bikes can be subjectively ‘romantic’, such as the passion that drives somebody to handcraft a café racer out of a bog standard Yamaha SR 500, or to produce a radically chopped hog from a stock Harley Davidson. Perhaps a better example is the ‘snob’ value attached to owning a particular model motorcycle such as an MV Augusta, a Vincent Black Shadow, or a Brough Superior SS100, dubbed ‘the Rolls Royce of Motorcycles’.

In ZAMM, Pirsig developed a complex set of ideas (drawn from both Eastern religion and Western philosophy) about the concept of ‘Quality’ (for which Pirsig uses an upper case Q), which he later called ‘the Metaphysics of Quality’.

In his Metaphysics of Quality (or ‘Value’ as alternatively named by Pirsig), Quality cannot be fully defined because it empirically precedes any intellectual constructions. It is the ‘knife’ or ‘cutting-edge’ of experience, known to us all, for example, intuitively knowing exactly how far you can lean your bike into a corner without losing it, or automatically using counter-intuitive counter steering when negotiating a set of corners at speed. This Pirsig called ‘dynamic Quality’.

This means that Quality lies in the dynamic ‘now’ moment that we sense anything during the instantaneous present; BUT with a short delay we then give this impression a ‘static form’ by describing it as an emotion, a thing, a word, etc. These ‘static forms’, if they have enough good or bad Quality associations, are given names and ideas about them are interchanged with other people, building the base of knowledge for a Quality culture.

As motorcyclists we can experience the thrill of riding our motorcycles (moments of ‘dynamic Quality’), but we must also understand the need to study the motorcycle manual in order to learn how to clean a spark plug, change the oil, or adjust the timing chain – the ‘static forms’ of Quality – tedious, but essential if you want the machine to operate as it was intended. We can then share this information with other like-minded individuals or groups by joining a club, chatting over a few beers with your mates at the pub, or by reading Old Bike Australasia magazine, which communicates the following aspects of our Quality culture:

So, according to Pirsig Quality is fundamentally a continuing dialogue between our personal (internal/subjective) values and beliefs, and certain publically accepted (external/objective) standards.

‘These were spectator manuals. It was built into the format of them. Implicit in every line is the idea that “Here is the machine, isolated in time and in space from everything else in the universe. It has no relationship to you, you have no relationship to it, other than to turn certain switches, maintain voltage levels, check error conditions….” And so on. That’s it. The mechanics in their attitude towards the machine were really taking no different attitude from the manual’s towards the machine….And it occurred to me that there is no manual that deals with the real business of motorcycle maintenance, the most important aspect of all. Caring about what you are doing is considered either unimportant or taken for granted.’ (Pirsig, ZAMM, p35, the text underlined is my emphasis)

Here Pirsig is criticizing the application of purely mechanistic approaches to Quality, because they lack human value. Such mechanistic approaches stand in stark contrast to the Zen notion of ‘mastery’ or to that of an artisan (from the Greek ‘Arete’, i.e. virtue, or excellence) where the mastery of technique is virtually indistinguishable from the person commanding it. Hence the ‘Art’ of Motorcycle Maintenance and the category of ‘Zen Master’! I’d put Valentino Rossi into motorcycling’s equivalent category, even if he did kick Marc Marquez off his bike mid-corner in one race!

Bur Pirsig argues forcefully that if you apply the Metaphysics of Quality to even a routine situation or in solving an everyday problem (such as making a fiberglass mold to cast a replacement toolbox), it is possible to get the same ‘Zen high’ from doing quite mundane tasks as well as the ‘dynamic quality moment’ allows (that is, by doing exactly what the situation actually requires, not in doing or saying ‘whatever you like’, or by trying to impress others). In the Metaphysics of Quality, being excellent in what we do, and being ‘fit-for-purpose’ (a formal definition of Quality) mean essentially the same thing.

According to Pirsig then, the internal (subjective) and external (objective) dimensions of anything, rather than being at opposite poles, fuse together into his more holistic concept of ‘Quality’. Take my own bike (1985 Honda GB500TT) as an example: it’s a 500 cc single-cylinder bike in the style of a ‘classic’ British 500 single (and subjectively it looks beautiful); but it is affordable and reliable, it doesn’t leak oil, and has electrics that work (including an ‘electric leg’ which means you can actually start it!). Subjectively and objectively it is a ‘Quality’ motorcycle’.

In ZAMM Pirsig further illustrates the holistic subjective/internal and objective/external dimensions of the Metaphysics of Quality through the use of motorcycle as metaphor:

“The motorcycle is a system. A real system…(but) the true system, the real system, is our present construction of systematic thought itself, rationality itself…That’s all the motorcycle is, a system of concepts worked out in steel. There is no part in it, no shape in it, that is not out of somebody’s mind…the motorcycle is primarily a mental phenomenon.” (Pirsig, ZAMM, p102)

And: “The real cycle you’re working on is a cycle called yourself. The machine that appears to be “out there” and the person that appears to be “in here” are not two separate things. They grow towards Quality or fall away from Quality together.” (Pirsig, ZAMM, p325.)

“Quality is the primary empirical reality of the world” – wow, to use a phrase from the ‘70s, ‘very Zen’!

So when the dimensions of what Pirsig called Quality, the internal/subjective and the external/objective, the ‘dynamic’ and the ‘static’, become so fused that they can no longer be easily distinguished from each other, (for example, when motorcycle and rider are as one), then that brings it all together. And if you add the idea of a Quality culture, it explains why motorcycling is such a consuming passion for so many Old Bike Australasia magazine readers. 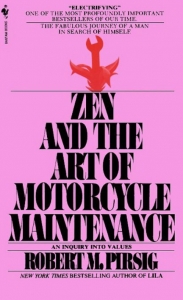 If you are interested in picking up more information about Pirsig’s Metaphysics of Quality, you could start by Googling it.

The Art of Cornering – An R60 Romance

Would you set off for a solo European tour on a 33-year-old motorcycle with virtually no riding experience? Kathy Head did. Story: Kathy Head Anyone who has read Zen and the Art of Motorcycle Maintenance […]