Working from a cramped shop in Venice, California Albert “Al” Crocker hand- built the first V-twin motorcycle bearing his name in 1936, three years prior to the outbreak of WW II. By the end of the war in 1945, the Crocker itself had become a casualty and for the most part faded into the history books. Only recently has it been rediscovered, skyrocketing to public consciousness due to the extraordinary nature of the motorcycle and the ensuing collector interest generated when these rare performance machines have resurfaced.

Having joined Indian in 1909 Al Crocker, credited for pioneering that company’s overhead valve racing efforts, became a Los Angeles Indian distributor in 1928. Then at age 53 he set out to design and build his own motorcycles, doing so one cylinder at a time, his one-lung short track speedway race bikes (some 30-32 built) scoring well in competition.

But it was his V-Twins referred to as “two-wheeled Duesenbergs” that would carve his niche into fame and fortune, though not his own. Totally unrelated in design from his single cylinder engines, the twins embodied a unique vision when first launched in 1936. Using aluminum components and powerful engines, they literally outclassed the competition, however in very limited numbers. While estimates vary it appears that only 61-64 Big Tank V-twins were built from 1936-41. Of that number an estimated 42-50 still survive today including the 1939 example seen here. (Several more were assembled in 1942 from extra motors that had been built and from parts previously not meeting Crocker’s inspection criteria.)

The Crocker V-twins were built in varying displacements with accessories as dictated by customer preference, and were in effect the first custom bike you could order from a manufacturer. The last batch of Crockers was produced in 1942 as WWII sucked up precious materials and as Crocker priced himself out of the running, losing some $2500 per bike he built from 1936-41. Al Crocker passed away in 1961.

The Crocker motorcycle fans the passions on many levels. As Crocker collector and historian Randy Wiggins sums it up, “Al Crocker set out to produce in limited quantity the most opulent, fastest, best handling motorcycle in the world, the premier roadster. It was a hotrod cruiser, the first power cruiser. You’ve got to remember it was 15 mph faster than its Harley and Indian competition and even outperformed the Brough-Superior SS100 and Vincent Series A. They are absolutely the Holy Grail of motorcycles. They were built to an ideal, rather than a standard. A Crocker is a Crocker. Nothing comes close.”

The leather saddle of this particular Crocker “Big Tank” bears the signature of Jack Lilly, one of the founders of the legendary Boozefighter Motorcycle Club rendered notorious by the indelible photos from Hollister, California appearing in LIFE magazine. After returning from WWII service in the Pacific, Jack purchased this bike from Al Crocker’s shop in 1946; this machine thus carries the patina of several milestones in motorcycling history.

At some point the Crocker passed from Jack’s hands and “disappeared” for several decades but then was found owned by a major collector by the name of Daniel Statnekov who actually had been riding the bike all around Arizona back in the 1980s. When one of Jack Lilly’s friends discovered he had the bike he contacted Daniel with the news that Jack, would be attending the reunion of the Boozefighters taking place in Texas. The year was 2001. Statnekov brought the bike to the reunion as a surprise for Jack who when presented with the bike, now meticulously restored and painted in the green and white colors of his club, climbed aboard his long lost Crocker with great delight. Not only was it a reunion with his fellow Boozefighters, he was brought together again after decades with his beloved No. 103. He was asked to sign the bike’s saddle which he did, inscribing his name, the Booze Fighters, and also his length of time with the Crocker, 1946 to that particular moment, 2001. At the age of 82 Jack was still his flying ultra-light airplane over his 1400 acre ranch up in the Cahuilla Indian Reservation. Sadly Crocker Jack Lilly motored on in June 2005.

As its serial number implies Crocker #103 was completed in 1939 (apparently in mid-year), is powered by an engine of 61 cubic inch displacement. While it bears the serial number 103, it is known that Al Crocker tended to skip serial numbers in order to create the impression that he had produced more motorcycles that actually rolled out of his shop, thus the discrepancy in estimates of total machines produced, the number smaller than indicated by serial numbers.

This particular machine’s engine was restored by acknowledged Crocker master restorer Ernie Skelton utilizing original NOS “Grade A” parts and by Johnny Eagles and Randy Wiggins who also contributed to the project while Damon Ritchie applied the stunning and accurate paint job.

If you follow vintage bikes at all, you’re aware that Crocker V-Twins are fetching astronomical prices in excess of $250,000 and beyond. It was an American classic that languished in the background for decades, known and valued by only a few, but now enjoying a revival of unparalleled proportions, but certainly well-deserved.

This particular example, the Jack Lilly Crocker, went up for grabs or should we say up for large bank accounts, at a special auction that took place in the Los Angeles area on June 14, 2008. The auction was held at the Joe’s Garage museum in Tustin, California, along with 50 rare classic cars, street rods and racers and a couple of dozen rare American motorcycles… Indian, Excelsior, Harley-Davidson, Flying Merkel and others. All the stuff belonged to Joe MacPherson, a flamboyant self-made entrepreneur who loved motorized vehicles and the Southern California car culture, and set about buying things he liked, or if need be, he had it made. He could do that since he owned several car dealerships around Southern California and was the guy who created the auto-mega mall concept. He made tons of money but also gave back to the community, aiding various charities and institutions. Joe passed away in May 2007 at age 78. He lived large and did a lot of good and left an indelible impression on those that knew him, many of who showed up for the auction conducted by well-known international auction house of RM Auctions.

While there were literally tons of famous cars, for bike fans the main spotlight focused on the “Jack Lilly” Crocker. Bidding was fast and furious, the winning bidder an individual intent on building a collection of the best bikes money could buy, the Jack Lilly Crocker one of four (at last count) that he had purchased in a matter of weeks. When the auctioneer slammed down the hammer for the last time, the winning bid was US$275,000. Talk about investing in precious metals….

Al Crocker designed and produced most of the parts at his company’s Los Angeles location and used no Indian or H-D components except for some wheel rim pieces bought through individual dealers since H-D would not supply him, obviously feeling threatened by his efforts. And since Crocker had worked for Indian there are some relative visual resemblances between Crocker and Indian parts (tanks, Scout-like forks, aluminum primary cover and generator drive location). However, the frame which included a cast-in steel gearbox, the forks and engine were pure Crocker. Many parts which on other bikes were fashioned from pressed steel or cast steel were made by Crocker in aluminum; even the fuel tanks.

All his production V-twins (built up to 100 cu. in.) relied on overhead valves although early models sported hemispherical head with exposed valve springs and later models had a flat, squish-type combustion chamber with enclosed valve springs. Spark came from a magneto while the choice of carburetors was Linkert or Schebler. 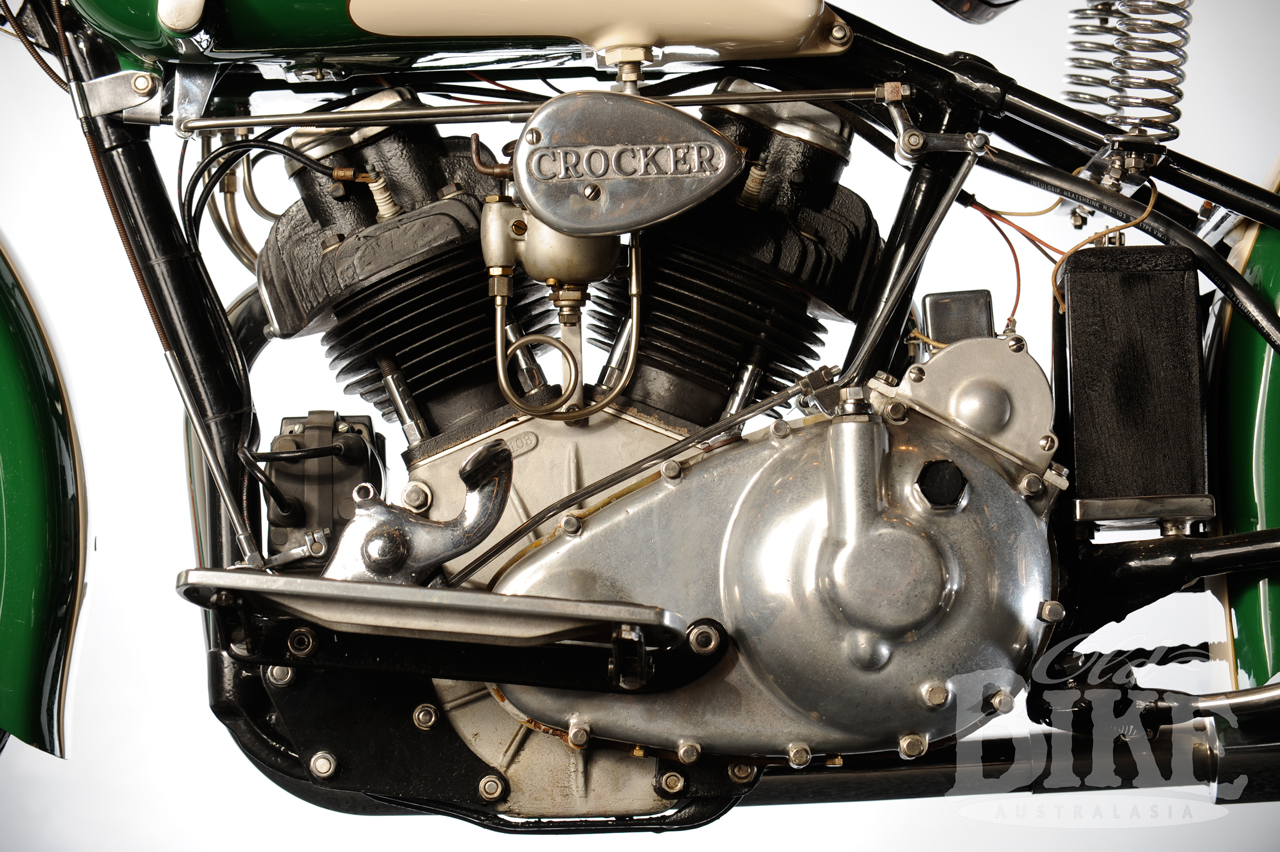 The Crocker designed engine was fairy “square” featuring a 3.25-inch bore to 3.625-inch stroke. The 61 cubic inch plant’s cylinders (made extra thick to allow for overboring) were set 45 degrees apart with a compression ratio of 7:1. The three-speed tranny was overbuilt as well and said to be able to withstand as much as 200 horsepower, although the hemi-headed stock 1936 machines produced 60hp, making for blistering speed for those times.

The Crocker has been compared to the big Detroit V-8 car of the fifties while its British competition, the Vincent was “fast but fragile” as compared to the “fast and rugged” Crocker. Coincidentally the Crocker was introduced five months prior to Milwaukee’s debut of the Harley’s famous OHV Knucklehead. As for a comparison to a contemporary Indian or Harley of the day, Crocker was so confident in the superiority of his machine that he offered a full refund to any buyer who was beaten by a rider on a Harley or an Indian. It was not until 1998 and Yamaha’s introduction of the Road Star that a larger production V-twin engine produced.

Returning from the carnage of fighting in WWII large numbers of GI’s were looking for some of that intense brotherhood seared by the flames of war. They were also looking for unencumbered freedom from the rigors of military life. Some of those vets rode bikes, the combination resulting in formation in 1946 of The Boozefighter Motorcycle Club (BFMC), its founder recognized as “Wino” Willie Forkner (who passed away in 1997) along with George Manker and Jack Lilly. The club and its members left indelible impressions on American Culture (and the world) when they earned the notorious status as the original “Wild Ones” when they partied heartily at the infamous Hollister, California event of July 4, 1947. Up on the big screen, and naturally blown out of proportions, audiences for decades have been entranced by the film supposedly chronicling the event and its participants, the classic film “The Wild One” starring Marlon Brando with Lee Marvin in the role of “Wino” Willie. (By the way, Jack Lilly missed attending the July 4th event as his wife was having a baby at the time.)

As their official club statement reads, “The term “Boozefighter” does not mean we are against responsible use of alcohol. However, we do forbid the use of non-prescription drugs, or any form of illegal activity. Furthermore they explain that “The Boozefighters have never been “one-percenters” or an Outlaw Club. We believe in respecting the rights of all motorcycle clubs in a peaceful, co-existent manner, and of all members of the community. We believe in freedom of choice and freedom of the road.”

That positive image, despite years of media misrepresentation, also extends to the BFMC support of various fundraisers like the Tarrant County Toy Run (Texas) that benefits children with the Mental Health Retardation Society and Wish with Wings, Inc who provides presents for children impacted by debilitating diseases.

Today The BFMC is one of the oldest active motorcycle clubs in existence with chapters across the United States and abroad. And as they sum it up, “A truly international organization. It is this rich history that is being preserved in the spirit of fellowship and good fun.”

Imagine if Valentino Rossi decided to spend the European winter earning a bit of pocket money by taking in a series of races in Australia with his works state-of-the art Yamaha Moto GP weapon. A […]

The combination of Sandy McCrae and his self-built Vincent specials was virtually indomitable, particularly at Bathurst. His friend and occasional passenger Gordon Gillies recounts his recollections… I was riding in a tram one day in […]