Before Homer Simpson revived interest in the place, Springfield, Massachusetts was the home of one of the truly legendary names in motorcycling.

The story of the Hendee Manufacturing Company began in 1882, when George Hendee began to make a name for himself racing crude, Penny Farthing-style bicycles, and within a year was the National One Mile Amateur Champion. He went on to become a bicycle manufacturer, producing the Silver King, but around the turn of the century, forged an arrangement with Oscar Hedstrom, to refine the latter’s motorised bicycle racing pacer into a machine capable of being ridden on the road. In fact, what Hedstrom produced in a tiny room of his bicycle factory, was a completely new design that bristled with original thinking. The prototype, featuring an inlet-over-exhaust single cylinder engine, was built in Connecticut and brought to Springfield in May 1901, where it was demonstrated to an enthusiastic audience who watched it climb inclines that would have been impossible for existing machines.  Later that year, the first factory to produce Indian Motocycles, a joint venture between Hendee and Hedstrom, was built in Springfield, with the engines produced by a sub-contractor in Illinois. The machines quickly gained a reputation for quality and innovation, featuring chain drive when leather belts were still almost universal amongst other manufacturers, as well as a handlebar twistgrip throttle.

In 1906, by which time annual motorcycle production was up to nearly 1,700 units, Indian began work on a V-twin, which fitted neatly into the existing bicycle-style frame. The 7 horsepower 42-degree 633 cc engine, essentially a double up version of the single, was made in the company’s new and much enlarged premises in Springfield, meaning that it was no longer necessary to sub-contract. An early achievement was the setting of a new one-mile record on a board track of 56.6 seconds. The V-twin, priced at a hefty US$275 and weighing 135 lb (61.3 kg)  headlined the 1907 model range and attracted plenty of customers, including a man of the cloth, who used his new machine to commute between Erie, Pennsylvania and Pittsburgh. Today, this is a journey of around two hours over modern roads, so it must have been an epic all those years ago. The priest and his Indian continued this ritual for three years, but in 1910 the Indian and its owner retired, and the bike was placed on a mantelpiece in the living room of the home where it remained until the owner passed away.

The ownership of the house, and the little twin passed to the priest’s son, who left everything in place for many years, with the thought that one day he would restore the bike. Alas, he left it too long, and he too succumbed to the ravages of time. On his death bed, he asked his best friend, Larry Smith, to take the bike and restore it to its original condition, which Larry promised to do. And so, one day in the early 1990s Larry, who worked in a hardware store in Eire, served a customer who was wearing an Indian t-shirt. “I have an Indian, do you know of someone who could restore it”, he asked the customer, who happened to be Dean Cohen, who runs Dino’s Motorcycle Repairs in Erie. “That’s what I do” was the answer, Dean imagining that he would be working on yet another old Scout or Chief. When he collected the machine, his heart skipped a beat, for here was the sole 1907 Indian twin known to exist. The rarity of the model was because the twin was substantially redesigned in 1908, with the original bicycle style frame that had been used from 1901 replaced by a new “loop frame” that made its debut in the 1909 range. Not surprisingly, Dean was reluctant to disturb such a totally original and unmolested machine, but Larry was insistent that he had promised his late mate that the bike would be restored. And so it was.

Dean took two years to carefully research every aspect of the model, which featured number stamping both inside and out on all major components, and identified subtle changes which distinguished the 1908 model from the 1907. These included longer front fork spring cartridges and slight changes to the muffler. The Indian still sported the original tyres, which were rock-solid and rusted to the rims, and the original leather tool bag and seat, both of which were beyond saving. 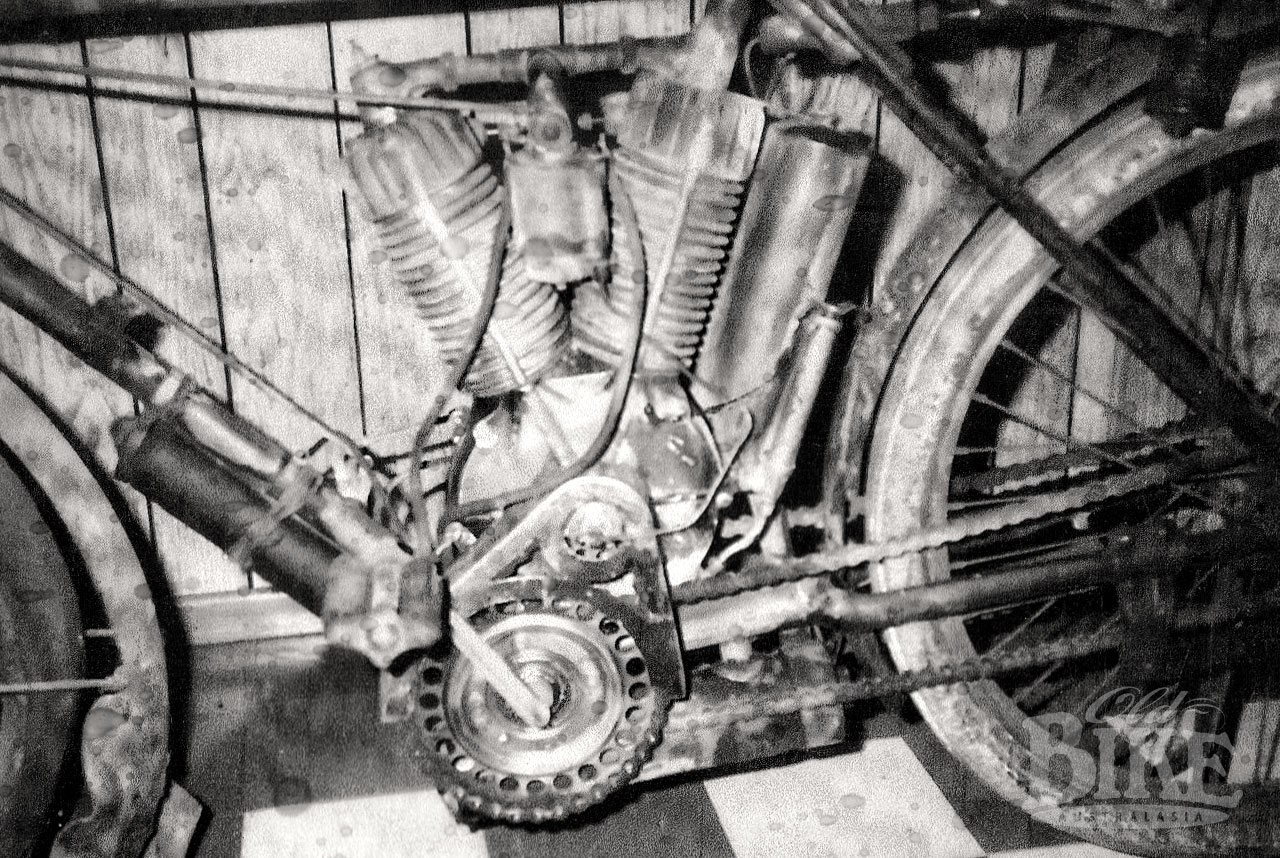 The restoration was completed in time for the Antique Motorcycle Club of America’s National Show in Oley, Pennsylvania, where the judges ran a sharp eye over the bike. Controversially, several items were judged to be incorrect for the year model, despite the fact that no major components had been replaced. These included the longer fork spring, which Dean surmises must have been a mid-year change to the model, the handlebars and grips, the muffler tail pipe, and the tool box which was stated to be too far forward. The engine had not been started since the restoration, and for one reason or another, would not fire, costing more points in the judging. Quite despondent that he had not fully complied with his friend’s dying wish, Larry took his bike home and decided to sell it. 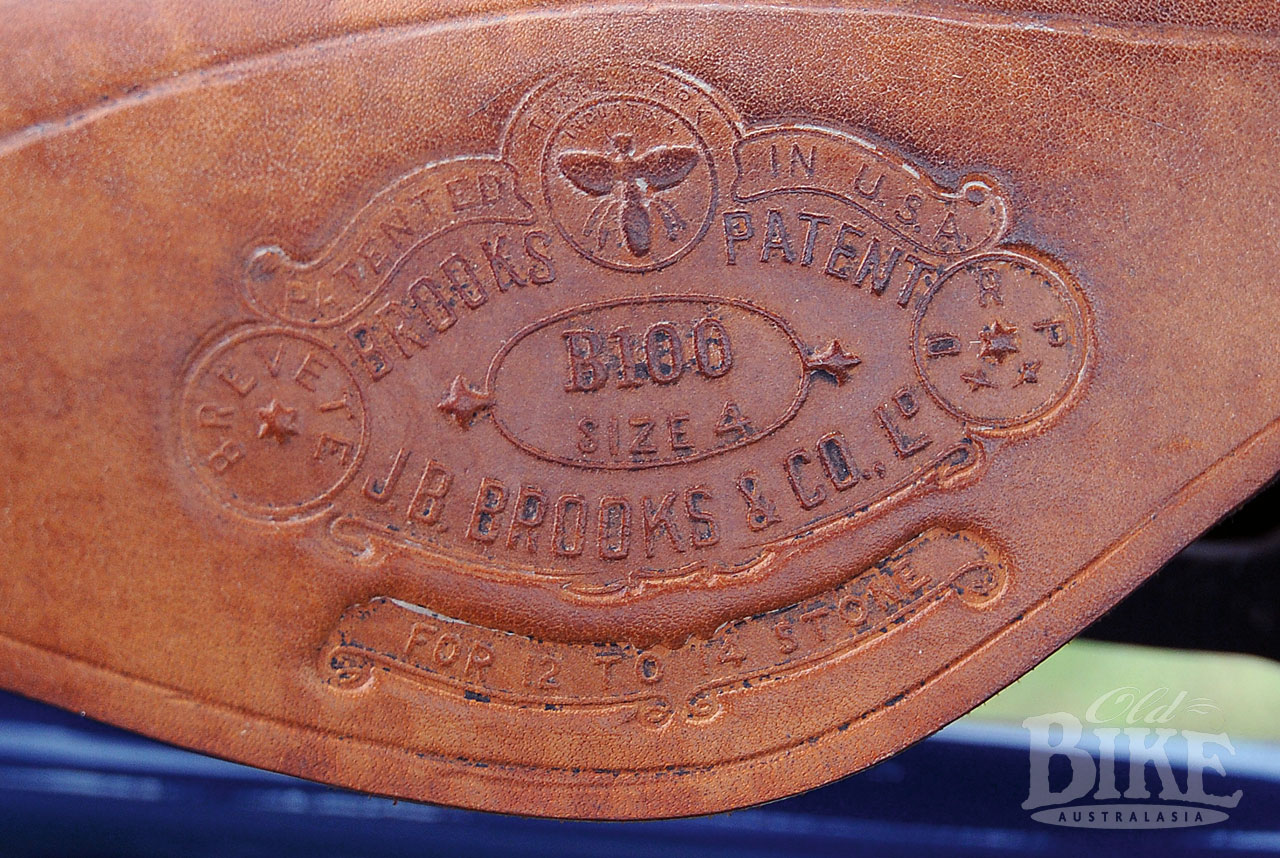 Immediately, huge offers began to flood in from all parts, but Larry kept his options open and eventually offered the Indian to Dean Cohen at a fraction of the prices he had been offered. It was still beyond Dean’s resources, but he had an ally in John Gee, owner of Antique Motorcycles, based in the Melbourne suburb of Mentone. John has been going backwards and forwards from USA for more than 20 years, importing and exporting bikes and parts, and was understandably very excited at the prospect of obtaining such a rare machine. “Three of us put the money up to buy the Indian, and it spent the first ten years of our ownership with Dean, which was the arrangement. Then it was my turn, and the bike has been with me for the past six years. It has still not been started, and this year – 2010 – makes exactly 100 years since it last ran. So later in the year we’re going to start it up for the first time in a century. We might take it to the Isle of Man in 2011, which will be 100 years since Indians finished first, second and third in the Senior TT.” 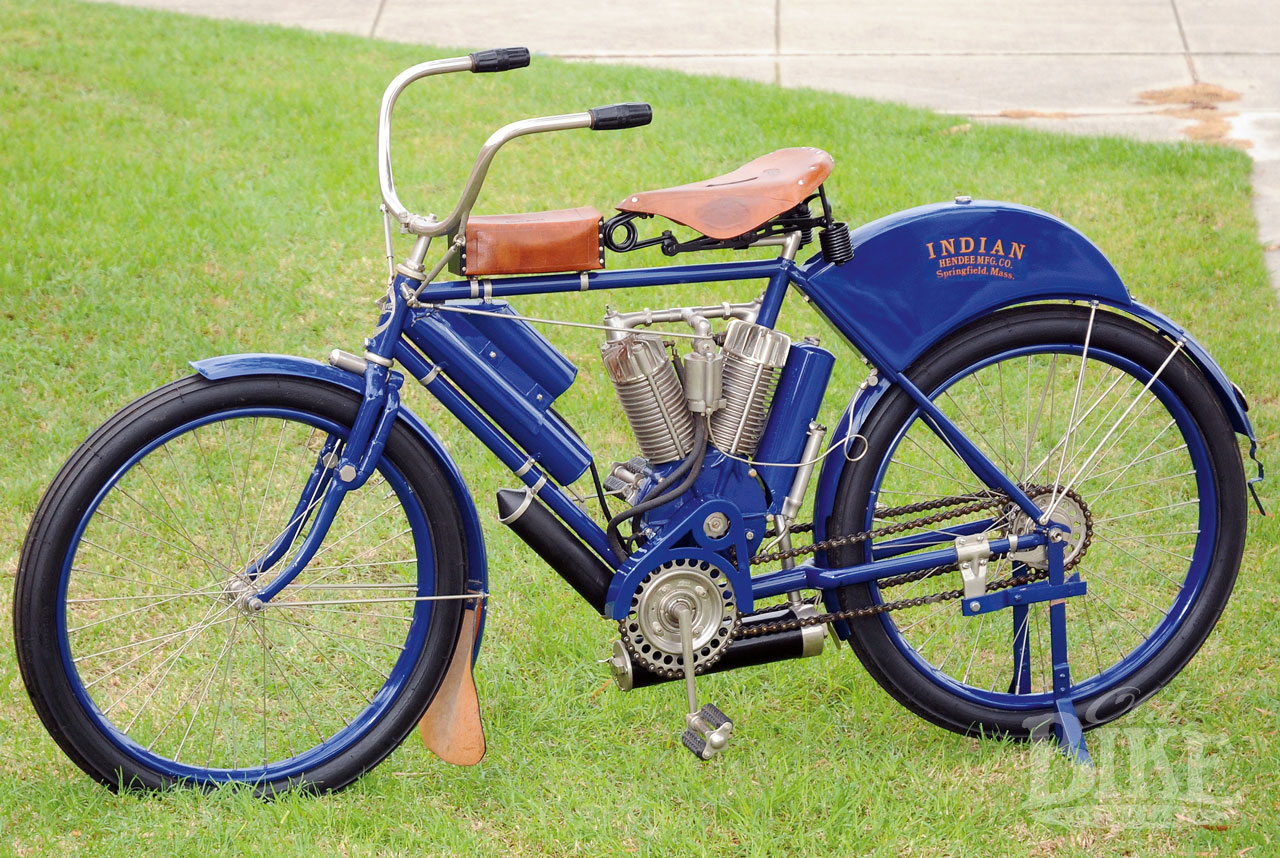 John points out that the Indian twin was far ahead of its time in 1907. “They came in two versions; chain driven primary like this one, and a helical gear-driven primary as an option. The gear drive later went into the Scout and the Chief, absolutely bullet proof. I’ve been dealing with these bikes for years and I have never seen the clutch drive or the front sprocket damaged – they just don’t wear out. The chain drive required quite a bit of servicing but the gear drive needed no attention at all.” He is also adamant that despite the AMCA’s nit-picking, the bike is almost completely original. “The only thing non-original was the hand grips, which we couldn’t get at the time so we fitted the anti-shake type grips which had the rubber extended beyond the ends of the handlebars. It now has the correct, short grips fitted. Since that show, we have taken the bike to experts who have verified that the muffler, forks and handlebars are all correct. We had to cut the tyres off – they had turned to bakelite! I don’t know of any other bike with this sort of history – certainly not one that hasn’t run in a hundred years. It’s funny that you can watch something like that bike out-survive all those people that owned it.”